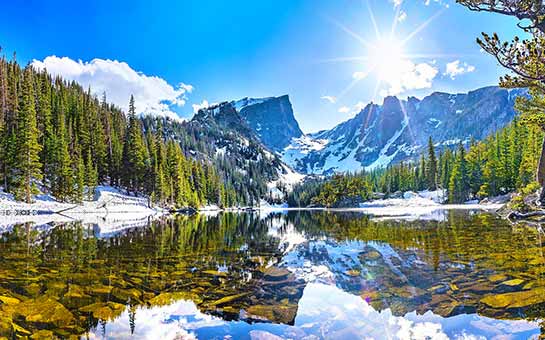 When you imagine travel destinations in Colorado, your first thought is probably somewhere mountainous, whether you're skiing in Aspen, hiking through Rocky Mountain National Park, or climbing one of the state's 58 fourteeners (a peak that rises more than 14,000 feet above sea level). It's true that there's no shortage of outdoor activities; given its 41 state parks, 12 national parks, and 13 national forests and grasslands, the area has plenty to offer the outdoorsy type. However, Colorado's appeal extends beyond the Rocky Mountains. If you're planning a trip to Colorado, try to make time for its multitude of cultural options.

President Ulysses S. Grant signed a proclamation admitting Colorado as the 38th state of the union in 1876, a hundred years after the signing of the Declaration of Independence. Hence, Colorado's nickname became "The Centennial State." Its population as of 2018 was just over 5.5 million. The state motto is "Nil sine numine," Latin for "Nothing without providence." The two official state songs are "Where the Columbines Grow" and John Denver's "Rocky Mountain High." Its capital and most populous city is Denver. There are seven major rivers that start in Colorado: The Rio Grande, North Platte, South Platte, Arkansas, Cache la Poudre, and Republican Rivers flow east toward the Atlantic Ocean, while the Colorado River flows west toward the Pacific.

Rocky Mountain National Park, located about 75 miles northwest of Denver, covers more than 250,000 acres and welcomes more than 4 million visitors each year. The park is one of the most popular national parks in the U.S. and is known for its mountain peaks (more than 100 of them over 10,000 feet), alpine lakes, meadows, forests, and hiking trails. Trail Ridge Road, the main driving path through the park, is a popular route for sightseeing. Summer activities include hiking, wildlife viewing, camping, fishing, horseback riding, climbing, and bouldering. Winter activities include snowshoeing and cross-country skiing. The park is open year-round, but closures sometimes happen based on weather conditions. If you keep your eyes open, you might catch glimpses of moose, elk, deer, bobcats, cougars, black bears, and other wildlife.

Mesa Verde National Park is a World Heritage Site preserving the archaeological remains of the Ancestral Puebloans, who occupied the area from about 450 A.D. to 1300 A.D. The park offers ranger-led tours through the remains of carved-out cliff dwellings and mesa-top villages, even allowing visitors to climb ladders up into the dwellings themselves. If you're there, don't miss Cliff Palace or the Chapin Mesa Archeological Museum, two of the park’s most popular sites. Hiking trails also let visitors explore the area unguided and lead them near beautiful, extensive artistic rock carvings called petroglyphs.

If you'd rather enjoy the beauty of the outdoors from the comfort of your car, try the Million Dollar Highway and the San Juan Skyway Scenic Byway. The Million Dollar Highway is a roughly 30-mile stretch of highway that runs between the old mining town of Silverton and the town of Ouray. The two-lane road curves along the mountainside and offers overlook views of cliffs, valleys, and mountain peaks. The San Juan Skyway Scenic Byway is a full-day extension of that route, a loop that begins and ends in Durango and passes through towns like Ouray, known for its hot springs, and Telluride, known for its ski resort and its traditional, small-town main street area.

Speaking of skiing, Colorado ranks among the most popular ski destinations in the U.S. It has 28 ski and snowboard resorts open from approximately early October to late April of each year. Breckenridge, a former gold- and silver-mining town, offers a Victorian-era feel and a nightlife with restaurants, bars, breweries, and a distillery. The Breckenridge Ski Resort resides in the Tenmile Range. If you're looking to do a little gambling, there are also a number of casinos in the area.

Steamboat Springs—which has the registered trademark nickname of Ski Town, U.S.A.—is an authentic mountain town featuring Howelsen Hill, Steamboat Ski Resort, hot springs, and summer biking opportunities. Finally, the town of Vail is a little more upscale, but the luxury hotels, fine dining, and designer shopping opportunities make it worth the expense (if you can swing it). It's the site of the Vail Ski Resort and the Vail Mountain Lodge and Spa.

While the great outdoors is probably Colorado's biggest claim to fame, there are plenty of urban attractions to enjoy. Denver, nicknamed the "Mile High City" because its elevation is exactly 5,280 feet above sea level, ranks in the top 20 most populous cities in the U.S. Points of interest include the Colorado State Capitol building; the Denver Aquarium; the Denver Art Museum; the Denver Zoo; the U.S. Mint, which produces 50 million U.S. coins per day; the Red Rocks Amphitheatre; and Elitch Gardens, a theme and water park featuring roller coasters and waterslides.

Colorado Springs, located in east central Colorado, has several natural and cultural draws for visitors. The U.S. Olympic & Paralympic Training Center opened in 1978 and contains an Olympic-sized swimming pool, an indoor shooting range, a velodrome, gyms, and weight rooms capable of serving more than 500 athletes and coaches at once. Several different levels of tours are available. The Air Force Academy is one of the largest tourist attractions in Colorado and sees about a million visitors each year on self-guided tours. The Cheyenne Mountain Zoo is America's only mountain zoo and features giraffes, meerkats, lions, zebras, black bears, African elephants, rhinos, Rocky Mountain goats, and more. The Garden of the Gods is a National Natural Landmark with sandstone rock formations set against the background of Pikes Peak. Finally, the Royal Gorge Bridge & Park, about an hour and 15 minutes southwest of Colorado Springs, features a 1,260-foot wooden bridge across a canyon 1,250 feet deep. The area is available for whitewater rafting, fishing, camping, and includes activities like ziplining and a skycoaster that hangs you over the gorge's edge.

Boulder, Colorado, has been named the Happiest City in the U.S. Nestled at the foot of the Flatirons rock formations just 30 minutes outside of Denver, it's fondly referred to as "the city nestled between the mountains and reality." Boulder is home to the University of Colorado, founded in 1867, and like many college towns, it provides a plethora of dining, shopping, and artistic outlets. The Boulder Farmers Market has been voted the best in the country. The Pearl Street shopping center boasts restaurants, independent shops, and street performers. Boulder hosts the annual Colorado Shakespeare Festival and the Colorado Music Festival. Take a tour of Celestial Seasonings, one of North America's largest tea factories. If you're looking for something intellectual, consider a tour of the National Center for Atmospheric Research or the National Oceanic and Atmospheric Administration.

Local cuisine includes Southwestern and Rocky Mountain-inspired dishes. Southwestern recipes are often a fusion of food traditionally eaten by Spanish colonial settlers, cowboys, Native Americans, and Mexicans. Staples include burritos, cactus fries, chili con carne, chile relleno, enchiladas, rice and beans, and menudo. Authentic Colorado-grown Pueblo peppers are a popular choice among locals and add a kick to anything from sandwiches to salsa to green chili with pork. If you're feeling bold, order up an appetizer of Rocky Mountain oysters—that's deep-fried bull or bison testicles. The town of Rocky Ford, Colorado, is known for its mouthwatering melon harvests, most notably watermelon and cantaloupe, that it sells at produce stands up and down the highway.

Be aware that many travel insurances don't cover any injuries or accidents that occur under the influence of mind-altering substances, legal or illegal. Vacation can be a time to let your hair down, but make sure to check the fine print of your plan before indulging.

It's highly recommended that as you're planning your vacation, you purchase travel insurance to protect against any unexpected developments. Travel insurance helps recover financial losses from incidents like trip interruption, emergency medical evacuation / repatriation, lost baggage, flight delays, rental car coverage, and accidental death & dismemberment. Similarly, visitor medical insurance can cover any injuries or illnesses that may occur, including emergency medical expenses, acute onset of pre-existing conditions, emergency medical evacuation / repatriation, and return of mortal remains, as well as more commonplace scenarios like loss of checked luggage for non-U.S. residents visiting Colorado. If you plan to participate in any adventure sports like skiing or snowboarding, it would be beneficial to purchase hazardous sports travel insurance, as well.