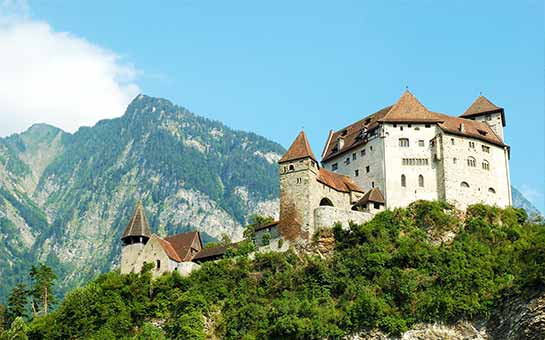 Liechtenstein visa travel insurance is required for all travelers to Liechtenstein that need a Schengen visa for travel or those who would just like coverage while traveling abroad.

Liechtenstein is a land locked principality with Switzerland on the west and Austria to the east; the capital city is Vaduz. The official language of the country is German; however, the dialect spoken is closer to Swiss and Austrian German. The population was recently estimated to be between 37,000 and 38,000 people, considering the entire country is only 62 square miles that is a large amount of people! Most people live in the long and wide Rhine valley in the capital city of Vaduz or north of the capital in Schaan. It is currently under the rule of Prince Hans-Adam II.

Liechtenstein is a popular tourist destination for many reasons, this forested, mountainous region has a continental climate with cold, cloudy winters with frequent snow and rain; making it a prime location for skiing and other winter sports. Summers are usually cool to moderately warm but can become cloudy and humid. The weather makes for great hiking and biking adventures on the trail networks, which are of varying difficulty and linked through the charming Alpine villages. There are no airports, making bus and train the easiest methods of transportation or even hitchhiking, which is common throughout the country. If you decide to drive a car, take extra care on the narrow, winding mountain roads when touring the many medieval castles, cathedrals and museums of modern and contemporary art.

The cuisine of this land locked country is influenced by its neighboring countries, the infamous haute cuisine of France made its way across Switzerland, creating a unique fusion of cultural dishes that are sure to please many palates. Certain staple foods such as wheat, barley, corn, potatoes, dairy and livestock are common in many cultures, including this one. However, there are some foods specifically enjoyed in Liechtenstein. Some famous dishes include:

Some interesting facts about Liechtenstein include declaring independence from German rule in 1866, and it was once part of the Roman Empire. It is the 6th smallest nation in the world, but holds onto the 2nd largest per capita of wealth and has no active military. The oddest fact of all, they are the world's largest producer of false teeth. Its two largest industries are ceramics used to make false teeth and tourism, as it is a beautiful place to visit.