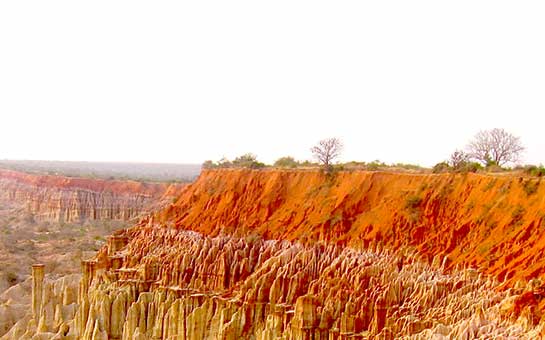 Angola is located on the west coast of South Africa, and the people here are mostly descendants from several ethnic tribes and kingdoms that ruled the region predominantly in the Old Stone Age. Thus, the region is a treasure trove for history buffs and anthropologists.

Angola has vast tracts of open lands, and there are many museums here tracing the history of the region. Angola has seen civil wars in the past and has been under the Portuguese rule for significant periods.

The architecture here is a mix of Portuguese and West African, and it is a rare experience to be able to look under such a myriad of layers of history. Before you head off to visit Angola, be sure to purchase travel insurance or travel medical insurance to cover any unforeseen illnesses, accidents, or injuries on your journey.

Things to Do for Travelers in Angola

A trip to Angola will not be complete without a visit to the following places:

Apart from being the largest lake in the country, Dilolo Lake is known for its supernatural elements. It is said that the waters of the lake have mystic powers, and people have experienced various supernatural occurrences at night. In the daytime, the lake is a favorite haunt of fishermen, and storks and gulls are also seen in large numbers. It is a great picnic spot to relax in.

Exploring the Fort at Benguela

Benguela has a very distinct Portuguese influence and is a major tourist spot. The Portuguese architecture is stunning and has stood the test of time. Climbing atop the fort-like structures gives you a splendid view of the surrounding vista. The spot is very close to the railway station, so traveling here is easy. An added perk is the warmth and friendliness of the locals.

Relaxing at the Arch Lagoon

This famous lagoon is situated in the region of Tombwa and has some spectacular rock formations that were carved by wind movements over the centuries. The surroundings are full of exotic wildlife and you can go for a hike by taking the smaller trails around. The overall ambiance is very serene, and a dip in the cool lagoon water would be a bonus.

A visit to any African country is not complete without a trip to a national park. The Candagala National Park is home to some of the rarest antelopes on the planet. It is also home to many endangered species of plants and animals. Entry to the park is restricted because of poaching, so be sure to acquire the necessary permits before you travel.

You will enjoy one of the most exciting sights in Angola here. The waterfalls are immense and the sound of water crashing on the rocks below is deafening. Adventure seekers can go very close to the falls by taking a bridge, which is open at certain times of the year. It is a great area for photography.

Here are some of the things to watch out for when you travel to Angola:

You should be careful about your baggage right from the moment you enter the country. Scams and thefts at the airport in Luanda are pretty common.

Illnesses can inflict you in Angola, as they are common in many African countries. Yellow fever, measles, chickenpox, jaundice, and typhoid are some of the illnesses you should be careful about.

Forest fires in the country have been reported in the past. You should be wary of going deep into the forests and you should opt for full protective gear and equipment if you plan to go boating in the lakes after bouts of heavy rainfall.

Travel medical insurance is needed to cover the cost of treatment if you fall sick or are injured in any way while traveling in a foreign country.

Do I need travel medical insurance for Angola?

It is not legally mandatory to buy medical insurance before traveling to Angola.

Even though it is not compulsory to buy medical insurance before you arrive in Angola, you would do well to get a plan for coverage.

You might get infected by some diseases like measles, yellow fever, dengue or hepatitis during your stay in the country. Or you could be bitten by insects while hiking in the forests. The heat could also lead to dehydration.

Angola travel medical insurance will cover the cost of treatment should you face any of these scenarios.

Opting for trip cancellation insurance will help you avoid financial losses in case of sudden cancellations during or right before the trip.

Angola Trip cancellation insurance can help prevent financial loss. In case hotels, tour operators or any other service providers in Angola cancel your bookings, you will get a reimbursement from the insurance company. There are also insurance policies which will reimburse you even if you cancel the trip. You're eligible for trip cancellation insurance benefits if you have to cancel your trip for a covered reason as listed in your policy's certificate wording.

What all is covered under trip cancellation insurance for Angola?

Before You Travel to Angola...