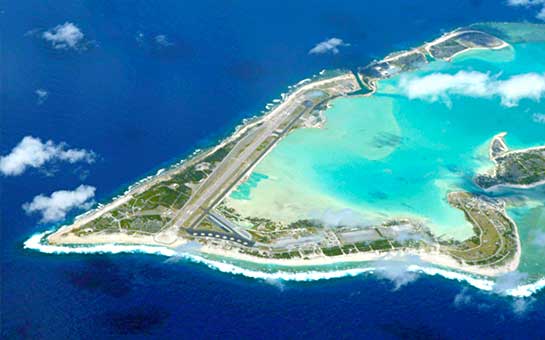 Wake was and is an important refueling stop for aircraft across the Pacific. Long before it became a strategic refueling station for the U.S. Air Force, the island solidified its place in military history when it was attacked on December 8, 1941 (being on the other side of the International Date Line), the same day as the surprise attack on Pearl Harbor by the Japanese forces.

There's plenty here for visitors to see and do. But before you leave, be sure to purchase travel insurance, visitors insurance or travel medical insurance to protect against any unexpected accidents, illnesses, or injuries that might occur on the trip.

Many people don't think about insurance abroad, but they should.

It's called travel medical insurance, and it covers emergency medical treatment, hospital stays, doctor visits, medical evacuation, and repatriation (should you need it).

Travel medical insurance is not nearly as expensive as you might think. It doesn't cost much, and it could save you hundreds of thousands of dollars if you have a medical emergency during your time on Wake Island. You can purchase insurance for days, weeks, months, or even a year to cover your health and evacuation expenses should something happen on Wake Island.

Do I need travel medical insurance for Wake Island?

It is not legally required. However, due to Wake Island's remote location, travel medical insurance is an absolute necessity—especially for travelers with pre-existing health risks.

All around the world, medical costs are skyrocketing. A little preparation goes a long way.

Wake Island is a remote island in the Pacific, and the closest land with modern medical facilities is in Honolulu, Hawaii. If you face a serious medical emergency during your trip to Wake Island, you will need emergency medical evacuation or repatriation. These services can be extremely expensive. Thus, buying Wake Island travel medical insurance in advance could help cover such an expense.

Your planned vacation and bookings can get swept away at the last minute due to external or personal factors.

Circumstances beyond your control can result in your trip being canceled. You or a travel companion could fall ill, your flight could get canceled, or a workplace emergency could pop up. But worry not: In such scenarios, Wake Island trip cancellation insurance can come to your rescue. You're eligible for benefits if you have to cancel your trip for a reason explicitly listed in the policy's certificate wording. You can get reimbursed for any prepaid, non-refundable expenses you put down in preparation for your trip.

Wake Island is known to face typhoons that shut the island down to any air travel or emergency landings. Also, due the island's strategic importance in the Pacific, it could be prone to attack—as the world witnessed in 1941.

To reach Wake Island, you need to make a trip from Honolulu, Hawaii, which is another destination that witnesses multiple cyclones every year. And with global warming, the climatic conditions are only getting worse. Hence, your planned trip to Wake Island needs to be protected at all costs from such calamities with trip cancellation insurance for Wake Island.

What all is covered under trip cancellation insurance for Wake Island?

Travel always comes with its own set of risks. These risks increase when you are traveling in another country. Buy Wake Island trip cancellation insurance, and as long as your reason for cancellation is covered in the policy, you can rest assured that you will be able to make a claim.

Most standard travel insurance plans include the most common reasons for trip cancellation, including:

Be sure to read your policy's fine print in full before purchase for a better understanding of what circumstances are (and aren't) covered.

Things to Do for Travelers on Wake Island

The best time to visit Wake Island is between May and December. Since Wake Island serves as an airstrip for the U.S. Navy, it is strictly regulated. There is no tourism industry. The island is generally not open to visitors. Wake Island requires a special permit from the U.S. military or the U.S. Fish and Wildlife Service to visit.

But, if you are lucky, you might just get permission for a day trip through Military Historical Tours.

Here's what you can explore at Wake Island:

One of the most prominent historic landmarks is 98 Rock. After being mortally wounded during a mass execution, one of 98 American civilian POWs escaped and swam nearly 2 miles across the lagoon and carved the memory of his fallen brethren into a coral stone before being recaptured and later killed.

Wake is also one of seven islands included in the Pacific Remote Islands National Marine Monument. The U.S. Fish and Wildlife Service works hand-in-hand with the Air Force to maintain more than 490,000 square miles (more than 1.25 million square kilometers) of exclusive economic zone and refuge.

Wilkes Island, on the western peak of the atoll, is home to a bird sanctuary with 40,000 birds and more than twelve species. That's unique, considering it's merely one square mile (about 2.6 square kilometers) in area. After many years of exchanging hands between service branches, the U.S. Air Force assumed administrative control of Wake Island in 2002.

You will also find the remains of Japanese fortifications and bunkers that date back to the time of World War II. Wake Island is a constant reminder of the past. American captives built over 100 concrete structures for Japanese as POWs. These structures have eroded over time and fallen apart. A few structures have even ended up in the ocean after being struck by a super typhoon in August 2006.

If ruins are your thing, visit the Pan American Airways Ville, a building and hotel constructed for Pan American staffers and their families. It had also built a ramp into the ocean for seaplanes, which now lies in ruins.

Wake Island is a highly restricted territory. It is also a remote island that is uninhabited except for a small community of contracted and civilian employees.

Wake Island's medical clinic consists of a team of two people; a physician and a paramedic that can provide basic care. But, anything serious will need to be swiftly dealt via emergency medical evacuation. The closest accessible land with medical facilities is in Honolulu, Hawaii.

As a visitor, you will not be able to spend more than a day on Wake Island. Due to the location, however, it is important to be aware of the risks beforehand.

As Wake Island is isolated, administered by the U.S. Air Force, and there are no permanent residents, there is no crime or terrorism risk. However, there are always chances of unforeseen attacks, natural disasters, or changes in political status.

Before You Travel to Wake Island…

Do not leave things to chance. It's worth purchasing insurance just to ensure peace of mind. As Wake Island is a remote island, it is recommended to do these three things before your trip.