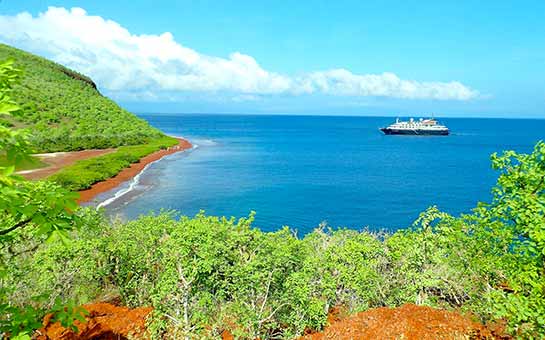 The Galápagos Islands (officially, in Spanish, the Archipiélago de Colón) are an archipelago in the Pacific Ocean, a little more than 550 miles west of Ecuador. They consist of 13 major islands, 6 smaller islands, and dozens of islets and rocks scattered across about 23,000 square miles on both sides of the equator. The region's claim to fame is its unusually large number and variety of endemic wildlife species—species that exist in one particular geographic location and nowhere else. During the 1830s, Charles Darwin's studies of the islands' unique wildlife played a significant role in his development of the theory of evolution. Wildlife tourism remains the main attraction of the Galápagos to this day. If you're planning a vacation to the area, make sure to purchase Galápagos Islands travel insurance to protect yourself against any unexpected events, illnesses or injuries that might occur on your trip.

The first recorded visit to the Galápagos was in 1535 by the bishop of Panama, whose ship blew off course while traveling to Peru. The islands were used as a stopping point for Spanish voyagers, pirates, and whale and seal hunters for about 300 years until they came under the jurisdiction of the Republic of Ecuador in 1832. Ecuador designated the islands a wildlife sanctuary in 1935 and as Galápagos National Park in 1959. They became a UNESCO World Heritage site in 1978.

Today, the islands have a population of about 25,000. The capital is Puerto Baquerizo Moreno, a small town of about 6,500 on the southwestern coast of San Cristóbal, the easternmost island in the chain. Notable attractions of the town include a cathedral, a branch of the Universidad San Francisco de Quito, the visitors center for Galápagos National Park, and San Cristóbal Airport.

Thanks to the islands' isolated ecosystem, the Galápagos are home to a number of unique animal species like the Galápagos tortoise (the area's namesake); the Galápagos penguin, the only species of penguin found north of the Equator; the waved albatross; and 13 species of finches, which Darwin used as a model for his theory of natural selection. The ecosystem is fragile enough that visitors are permitted only as part of guided tours to designated visitor sites. Of these sites, 54 are on land, and visitation to many of them is limited to small groups visiting in 2–4-hour increments. Cruise tours have become a popular way to sightsee without impacting the environment.

The Charles Darwin Research Station, located in Puerto Ayora on Santa Cruz Island, is a biological research station that opened in 1959. Its goal is to conduct scientific research and encourage environmental education. The station features an active breeding center and a natural history interpretation center with exhibits and displays about the area's history and ecology. Travelers insist that the research station is a must-see for any first-time visitor to the islands. It's also a good spot to catch a glimpse of one of the famed Galápagos giant tortoises, although they don't roam as freely as they do within other sites.

For prime glimpses of these majestic specimens, which can weigh more than 900 pounds and live for up to 150 years, two recommended spots are El Chato Tortoise Reserve and the Rancho Primicias. Both are also located on Santa Cruz Island. El Chato Tortoise Reserve is the more popular of the two, a wildlife sanctuary staffed with rangers actively hunting predators and building fortified walls to protect the dwindling tortoise population. The Rancho Primicias, a similar giant tortoise sanctuary, boasts fewer crowds and better photo opportunities—as well as empty tortoise shells that visitors can climb into. Both sites are among the few in the world where visitors can observe the tortoises in their natural habitat. Both reserves also boast tunnels made of cooled, hardened lava for exploration, as well as an on-site restaurant. A word of caution: In line with the protective atmosphere of the reserves, please be careful not to touch or feed the tortoises.

Tortuga Bay, also on Santa Cruz Island, is home to white-sand beaches and scenic ocean views, but it's better known for the small black turtles who lay their eggs there. Hatchlings emerge each April and May to fight their way to the sea. Even if you visit in the off season, you'll still find plenty of indigenous wildlife like marine iguanas and Sally Lightfoot crabs. The bay has two beaches; the beach closer to the entrance (Playa Brava) is known for its strong currents, so most beachgoers and swimmers prefer the further beach (Playa Mansa). Playa Mansa also offers kayak rentals.

La Lobería, a beach near Puerto Baquerizo Moreno on San Cristóbal Island, offers a wider variety of wildlife as well as surfing, swimming, and snorkeling opportunities. The stretch is best known for its population of lively sea lions, although they're best enjoyed from a distance—male sea lions can be territorial and aggressive toward humans if they feel threatened. You're also likely to encounter wild iguanas, lava lizards, yellow warblers, and frigates. It's also worth noting that even though the beach is open 24 hours a day, no permanent facilities are available, so you'll have to bring your own snorkeling equipment if that's your cup of tea.

Finally, the Galápagos is known as one of the best sites in the world for bird-watching, and visitors there for that purpose have several options. Isabela Island is where the Galápagos penguins live, and North Seymour Island is your best bet to spot blue-footed boobies and frigatebirds. Española Island has waved albatrosses (the only living tropical albatross) and Darwin's finches. Genovesa Island plays home to red-footed and Nazca boobies. Santa Cruz Island features a wide variety of land birds.

The Galápagos Islands have seen nearly continuous volcanic activity for about 20 million years. Sierra Negra's most recent eruption was in 2005, while Fernandina on Fernandina Island most recently erupted in 2009. Isabela island contains 6 major volcanoes, and the area's 9 active volcanoes have erupted a total of 24 times between 1961 and 2011. The Sierra Negra Volcano on Isabela island is a popular spot for tourists; the crater measures in at more than six miles, the second-largest on the planet, and many travelers say it's worth the trek to stare down into its glowing fumaroles and caldera.

If you're worried about a volcanic eruption disrupting your vacation, it's a good idea to learn more about how volcanoes impact travel insurance. Also, if you're doing any serious hiking or mountaineering, it might be worth your while to purchase a hazardous sports travel insurance package to protect you against any unexpected illnesses or injuries that may occur.

Before you leave for the Galápagos, we highly recommend that you purchase travel insurance and travel health insurance. Perhaps you're not sure what to look for or how to choose the plan that best fits your needs. Given the area's remote location, it's possible that in the result of a health emergency, you'd have to be medically evacuated. Whatever questions you have or obstacles you're facing in choosing an insurance plan, we're happy to help. Please call + 1 (866) INSUBUY or send us an email to get in touch with one of our licensed, experienced representatives.