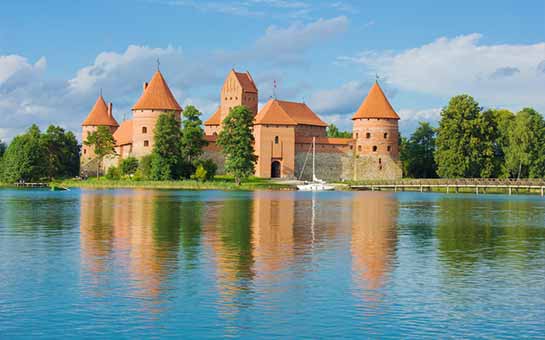 Lithuania Visa Travel Insurance is required for all travelers to Lithuania that need Lithuania visa.

A country in the southern most part of Europe's Baltic States, Lithuania is a former Soviet bloc nation that borders Poland, Latvia and Belarus. It is the largest and most populous of the 3 Baltic States, and the capital, Vilnius, lies near the Belarus border.

Vilinus is known as a medieval gothic old town and showcases Renaissance and Baroque architecture along with an 18th century Cathedral. Also, within the capital is the Hilltop Gediminas Tower, which is considered to be a symbol of the city and the nation. It offers sweeping views of the city making it a great way to experience Lithuania.

There are many things to do in Lithuania including traveling the Curonian Spit; this is a 98 km long spit or an elongated sand dune that separates the Curonian Lagoon from the Baltic Sea Coast. It dates back to prehistoric times and is now a National Park to protect its ecosystem. Across its 60 miles, it has dunes, forests and villages along the coastline, and is considered one of Europe's less-seen gems.

Lithuanian cuisine is simple but offers a variety of interesting dishes. Many of these are made with rye, potatoes, mushrooms, beets, greens, berries, dairy, and various types of meat. Pork would be considered the most popular meat used and they are also well known for dark rye bread as well as cold beet soup.

The weather in Lithuania can be extreme in some seasons and average in others. The best times to visit would be spring or fall, as the summers can get very hot and the winters very cold. The winters are particularly long from November to March with the temperature rarely rising above 0 degrees C.