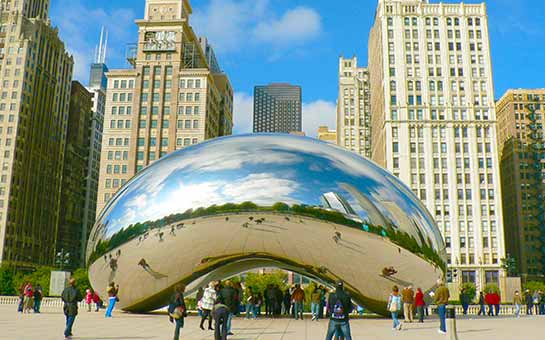 Illinois probably isn't the first U.S. state that jumps to mind as you're brainstorming vacation destinations, but the "Land of Lincoln" just might surprise you with how much it has to offer. The state's most obvious draw is Chicago, an international hub of commerce, culture, technology, transportation, and more. You could spend your entire trip in the Chicago metropolitan area and still barely see a fraction of the city's sights. But beyond the big city lie fascinating historical, natural, and cultural hidden gems worth checking out. As you plan your trip to Illinois, remember to add Chicago Travel Insurance to your to-do list.

Illinois joined the union as the 21st state in 1818. Its population as of 2018 was a little more than 12.5 million permanent residents; Chicago and its surrounding suburbs account for about 9.5 million of those. The state capital is Springfield. The official nicknames are the "Land of Lincoln" and the "Prairie State", and the state motto is "State Sovereignty, National Union". The state anthem is titled, simply, "Illinois." Three U.S. presidents—Abraham Lincoln, Ulysses S. Grant, and Barack Obama—have been elected to office while living in Illinois. Between the urban powerhouse of Chicago, the agricultural productivity in the north, and an abundance of natural resources like coal, timber, and petroleum in the south, Illinois has been called a microcosm of the U.S. as a whole.

Chicago. The Windy City. "One town that won't let you down," as Frank Sinatra put it. Located on the shore of Lake Michigan, Chicago is the third-most populous city in the United States and home to countless cultural, educational, and architectural institutions. If you're an international visitor flying straight into Illinois, odds are good that you'll arrive at one of the city's two international airports, either Midway or O'Hare. Start your vacation off right with some of these can't-miss attractions.

The Art Institute of Chicago is one of the largest and most extensive art museums in the United States. It sees about 1.5 million visitors each year and houses more than 300,000 works of art spanning 5,000 years of human history. Some of its most prominent paintings include works by El Greco, Rembrandt, Manet, Monet, Renoir, Seurat, Picasso, van Gogh, Cezanne, Wood, and Kandinsky.

The Museum of Science and Industry, located in the Hyde Park neighborhood, was founded in 1933 and has the reputation of the first U.S. museum to include hands-on exhibits. Noteworthy exhibits include a German submarine captured during WWII; a full-size replica coal mine that takes visitors on an underground mine-train ride; the control module of the Apollo 8 spacecraft; and "Yesterday's Mainstreet," a recreation of an early 20th-century Chicago street featuring cobblestone streets and functioning shops.

The Field Museum of Natural History holds more than 20 million artifacts and is one of the largest museums of its kind in the world. Its exhibits cover fields including geology, botany, zoology, and anthropology. The "Inside Ancient Egypt" exhibit displays 23 human mummies and a three-story replica of Pharaoh Unas-Ankh's tomb. Cultural halls showcase artifacts from Tibet, China, Africa, and the Pacific Islands. The museum is also home to Sue, the largest and most complete Tyrannosaurus rex skeleton ever discovered.

Let's say the weather's nice and you want to spend some time outdoors. Consider Millennium Park in downtown Chicago. The park's claim to fame is a 110-ton, mirrored stainless steel sculpture called the Cloud Gate but colloquially referred to as "the bean". Crown Fountain is a 50-foot video sculpture displaying the faces of Chicago citizens with a jet of water streaming from the mouth. Lurie Garden, a 3.5-acre garden, is free to visitors and is enclosed on two sides by a 15-foot-high "shoulder" hedge.

Navy Pier, located on the shoreline of Lake Michigan, is a 3,300-foot pier housing parks, gardens, shops, restaurants, concert venues, a Ferris wheel, a carousel, and a 3D IMAX theater. The pier is one of the most popular tourist destinations in the U.S. and welcomes almost 2 million visitors each year. It's also the site of the Chicago Children's Museum and the Chicago Shakespeare Theater.

Finally, no visit to Chicago would be complete without a visit to the Willis Tower, formerly known as the Sears Tower. The Skydeck juts out at the 103rd floor, offering a panoramic view of the city—and, for the bravest of visitors, a line of sight straight down through the glass floor to the sidewalk more than 1,350 feet below.

Chicago is known for a few culinary staples that you absolutely have to try if you're in town. For one, there's Italian beef sandwiches topped with giardiniera peppers and soaked in juice until you're better off using a fork. Then there's authentic Chicago deep-dish pizza, baked with a high edge to contain a mouthwatering mélange of toppings, cheese, and a lake of tomato sauce. Get your hot dog Chicago-style with mustard, onions, relish, a dill pickle spear, tomato slices, peppers, and celery salt on a poppy seed bun. (Most natives agree that ketchup is NOT an acceptable substitution.) If your appetite's a little lighter, consider Chicago-style popcorn, a sweet and savory blend of caramel and cheddar cheese popcorn. Popcorn is also the official snack food of the state of Illinois.

Springfield, Illinois, was U.S. President Abraham Lincoln's hometown before he took office. As such, it's definitely worth visiting if you're a history buff. The Abraham Lincoln Presidential Library and Museum holds important papers, manuscripts, pictures, and maps from his life. The museum also has a full-size replica log cabin and a recreation of Ford's Theater, where he was assassinated. Similarly, the Lincoln Home National Historic Site was built in 1839 and was the only home besides the White House that he and his wife ever lived in. Guided tours are free for visitors. Lincoln's tomb is located in Oak Ridge Cemetery, a popular historic destination.

Starved Rock State Park, located on the Illinois River, offers a slew of outdoor sights and activities. It's known for its scenic canyons and waterfalls, as well as guided or unguided hikes, fishing, boating, picnicking, horseback riding, camping, and winter sports.

The Cahokia Mounds State Historic Site is the largest prehistoric Native American settlement north of Mexico. It was home to the Mississippian culture from about 700 A.D. to 1400 A.D. and at its peak had anywhere between 10,000 and 20,000 inhabitants. It holds more than 120 earthen mounds with Monks Mound, more than 100 feet high, at the center. A museum and cultural center exhibits audiovisual presentations, artifacts, dioramas, and a life-size village recreation.

Finally, if you want something a little more relaxing, consider Anderson Japanese Gardens in Rockford. It's a 10-acre Japanese-style garden designed as a peaceful retreat center featuring waterfalls, ponds, streams, rock formations, winding paths, a tea house, and a guest house. It's the ideal site to observe natural beauty and to enjoy quiet, thoughtful contemplation.

Be aware that most travel insurance plans don't cover claims for accidents or injuries that occur while you're under the influence of any mind-altering substances, legal or illegal. Be sure to check the fine print of your plan before you indulge too heavily, even if you are on vacation.