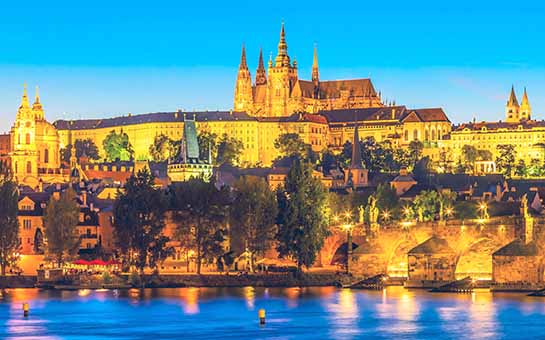 The Czech Republic is a landlocked country in Europe with the capital being the city of Prague. Its borders are Germany, Poland, Slovakia, and Austria. Also, it is the ninth most peaceful country in Europe as well as the healthiest (by infant mortality rate) country in the region.

The country is a pluralist multi-party parliamentary representative democracy with a Prime Minister as the head of the government. The Parliament is bicameral with the Chamber of Deputies and the Senate. Before 2013, the President of the Czech Republic was selected by a joint session of the Parliament. Now, the president is elected directly by the citizens.

Important inventions from the Czech lands include the modern contact lens and the seperation of modern blood types. Prominent scientists lived and worked historically in Czech land. Some include Gregor Mendel, a scientist who is famous for his research concerning the inheritance of genetic traits, and Jakub Kryštof Rad, the inventor of sugar cubes.

Tourism gives a substantial income to the Czech economy. In 2011, Prague was the sixth most visited city in Europe. The country is renowned for its love of puppetry and marionettes, and multiple puppet festivals are held across the country. Aquapalace Praha in Čestlice near Prague is the largest waterpark in central Europe.

The Barrandov Studios in Prague are the largest film studios in the country and is also one of the largest in Europe. The Czech Republic has many popular film locations. Filmmakers have come to Prague to shoot scenery no longer found in Berlin, Paris and Vienna. In the 2006 James Bond movie Casino Royale, scenes were shot in the city of Karlovy Vary.

Sports are a part of life for many Czechs. The most popular sports in the Czech Republic are ice hockey, association football, sport shooting, and tennis. The Czech ice hockey team won the gold medal at the 1998 Winter Olympics and has won six gold medals at the World Championships including three straight from 1999 to 2001.

Do I Need Travel Insurance for the Czech Republic?

Before you visit Czech Republic, you would need to purchase Schengen Visa Travel Insurance to meet Schengen visa requirements. Once you complete an instant online purchase, you would be able to print the visa letter that you can take it to Czech Republic consulate that would issue you Czech Republic visa.