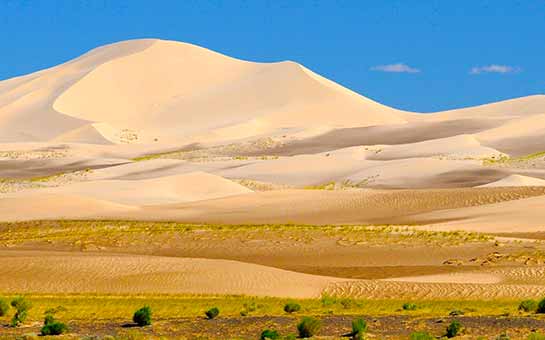 Mongolia is a landlocked country in north-central Asia, nestled between Russia to the north and China to the south. Its capital is Ulaanbaatar, and its population was about 3.1 million people as of July 2018. Mongolia is one of the least-densely-populated countries on earth, with an average of about two people per square kilometer; about 45% of the population lives in the capital city. Mongolia’s tourism industry was practically non-existent until the collapse of the Soviet Union and the Revolutions of 1989; since then, its claim to fame has been natural tourism, given the country’s largely undeveloped landscape and traditionally nomadic culture. If you’re planning a visit to Mongolia, please consider purchasing Mongolia travel insurance to protect yourself against any unexpected illnesses or injuries that might occur.

Mongolia might not be the first country that jumps to mind when you’re brainstorming travel destinations, but its hidden gem status is part of its charm. Adventure tourists in particular might be surprised to find out how much the country has to offer, from trekking on camels across the Gobi Desert to riding on horseback through vast expanses of grassland to spending the night in a nomadic family’s ger (tent). If you’re looking to get in touch with a foreign culture, look no further than Mongolia.

Ulaanbaatar serves as both the geographic and practical center of the country; it contains both Mongolia’s only international airport and only international rail line. The downtown area boasts modern buildings and glass skyscrapers, but horsemen and cattle can still be seen wandering through the streets, and on the outskirts of town lies the “ger district,” with thousands of traditional Mongolian tents.

Ulaanbaatar has a number of cultural and historic attractions. There’s the 19th-century Winter Palace of the Bogd Khaan, built by Mongolian masters and currently a museum complex. The Gandan Monastery is the largest monastery in the country and the only one where Buddhist services continued during communist rule. Within the monastery lies the Migjid Janraisig Temple, housing a bejeweled, 85-foot statue of Migjid Janraisig. The Choijin Lama Temple, built between 1904 and 1908, serves as a classic example of traditional Buddhist architecture. The National Museum of Mongolia, true to its name, presents exhibits about the history of Mongolia from prehistory through the present day. Meanwhile, the Mongolian Natural History Museum offers information about the country’s flora, fauna, geology, geography, and anthropology. If you’re in the mood to shop, the covered, outdoor Naran Tuul Market contains a variety of stalls selling everything from souvenirs to clothing to carpets.

The Naran Tuul Market is a hotspot for pickpockets and purse-snatchers. Make sure to keep track of your personal belongings, and remember to stay safe!

The region around Ulaanbaatar also has several attractions. The Genghis Khan Equestrian Statue Complex features a 131-foot statue of Genghis Khan holding a whip; the site of the complex is traditionally said to be the spot where the leader found the golden whip that inspired his future conquests. The complex features a museum, horse and camel riding, hiking and fishing opportunities, and a souvenir shop. 13th Century National Park features a recreation of a 13th-century Mongolia “micro-kingdom” with activities for visitors like making felt covers for gers, slinging wool, wedding ceremonies, animal sacrifice ceremonies, mare milking, and more.

The Gobi Desert is a rain shadow desert running through Southern Mongolia. Great Gobi National Park was established in 1975. The region has become a goldmine for paleontologists. The first-ever full dinosaur skeleton was found in the Khermen Tsav canyon, and the first-ever dinosaur eggs (26 of them) were discovered in 1923. Attractions in the desert include Khongoryn Els, the “singing dunes”, so called because they resonate a strong sound as the sand blows in the wind or rolls downhill; Eagle Valley, a protected site that narrows into a gorge; and Bayanzag, the site of many of the paleontology discoveries mentioned above. Distinctive wildlife in the area include the last two-humped camels and Gobi bears left in the world.

Khorgo-Terkhiin Tsagaan Nuur National Park, about a five-hour drive west of Ulaanbaatar, encompasses two attractions: the extinct Khorgo volcano, and Terkhiin Tsagaan Lake. The park was established to protect its native scenery, flora, and fauna, and it’s surrounded by the Khangai Mountains. The Khorgo crater is the most notable of about a dozen extinct volcanoes in the area, as it regularly emits jets of steam that freeze in the winter to form ice molds. Meanwhile, the Terkhiin Tsagaan Lake is a sight to behold at 10 miles long, about 65 feet deep, and covering an area of almost 24 square miles. It was formed when a mass of hot lava blocked the bed of the River Terkh. Out of the lake bursts the River Suman, so turbulent that the water doesn’t freeze even in the coldest of winters. Common activities in the park include visiting nomadic families, horseback riding, hiking, and bird watching. The nearby Ugii Lake is also a popular fishing spot.

Khustain Nuruu National Park, also called Hustai National Park, is a specially protected area home to the world’s only naturally surviving species of wild horse, Przewalski’s horse. The horse was extinct in the wild until its reintroduction into the park in 1992. The park’s environment ranges from mountain steppes to sand dunes to river wetlands. Gorkhi-Terelj National Park, only an hour outside of Ulaanbataar, is one of the most scenic sites in the country, featuring mountains, rock formations, meadows, and a winding river. Available activities include horseback riding, hiking, visiting a hilltop Buddhist monastery, and visiting or staying with a nomadic family.

If your travel plans include hiking, we’d recommend purchasing hiking and mountaineering insurance in case the worst should happen during your trek.

Mongolian cuisine is definitely a product of the region’s climate. Staple ingredients include dairy, meat, and animal fat (required to keep warm during working outdoors in cold temperatures), while vegetables and spices are rare. Most nomads get their meat from domesticated animals like cattle, horses, camels, yaks, and sheep; one of the most common rural dishes is cooked mutton. The most popular city dish is buuz, steamed dumplings filled with meat. Stews and soups are common, as are porridge and salted milk tea. Fried and malted barley is another popular cereal choice. For dessert, try a delicious cookie called a boortsog.