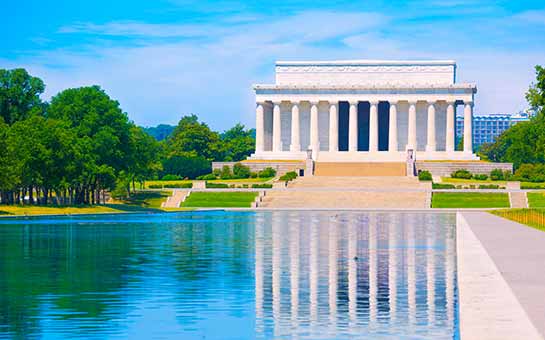 As the nation's capital, Washington, D.C., is home to some of the most famous landmarks and cultural icons in the United States, both symbolic and practical. The city was founded in 1791 on land donated by the states of Maryland and Virginia so that the federal government's headquarters wouldn't be housed in any one state. From the White House to the Washington Monument, from the Lincoln Memorial to Capitol Hill, you'll have your work cut out for you if you want to see everything in one trip. As you're planning your vacation, make sure to purchase Washington, D.C., travel insurance. You never know when or how plans might go awry, and it never hurts to be prepared.

Built in 1792, the White House has been the official residence of every U.S. President except George Washington. British forces set fire to the building in 1814 during the War of 1812, but it was rebuilt by 1817 when President James Monroe moved in. President Theodore Roosevelt initiated major renovations in 1902, most significantly moving the president's offices to their current location in the West Wing. Today, the White House has 132 rooms, 35 bathrooms, and 6 levels. Free, self-guided tours are available to the public, but anyone wishing to visit must submit a request through their member of Congress. International visitors can arrange tours through their country's embassy in Washington, D.C. The nearby White House Visitor Center displays interactive exhibits, historical information, and videos featuring reflections from past presidents about the residence.

The U.S. Capitol Building, located on Capitol Hill, is home to the two halves of the United States Congress, the House of Representatives and the Senate. The building's dome was modeled after that of St. Peter's Basilica in Rome and is one of the city's (and the nation's) most iconic images. The inside is decorated with frescoes, reliefs, and paintings depicting scenes from American history. Free tours are available but require advance online reservations. To visit the House or the Senate while in session, you should either contact your Congressional representative for a pass or, if you're an international visitor, make arrangements through the visitor center.

An underground passage leads visitors from the Capitol to the Library of Congress, the largest library in the world. On display are one of three complete surviving Gutenberg Bibles; an earlier, hand-printed Bible; Thomas Jefferson's draft of the Declaration of Independence and personal library; and historical exhibits focusing on topics from the Gershwin brothers to editorial cartoonists.

The Washington Monument is a 555-foot shining white obelisk built to honor George Washington, the "Founder of His Country." Congress approved the project in 1783, but construction didn't start until 1848 or finish until 1885. The stones' different colors reflect the different stages of the monument's assembly. A circle of 50 American flags surrounds the base. Inside, visitors can see engraved stones from different cities, states, and foreign countries. An observation area at the top allows for aerial views of the National Mall and a significant part of the city at large.

The Lincoln Memorial, portrayed on the back of the U.S. five-dollar bill and one-cent piece, serves as a tribute to President Abraham Lincoln. The memorial sits at the west side of the Reflecting Pool of the National Mall. Its massive marble columns were designed to evoke the feel of an ancient Greek temple, and the statue of Lincoln inside measures 19 feet tall and 175 tons. Its interior features murals and engravings of important events from Lincoln's life and texts from his greatest speeches. The memorial's steps were the site of Martin Luther King, Jr.'s famous "I Have A Dream" speech during the Civil Rights Movement in 1963. The monument is largely outdoors and is open to the public 24 hours a day.

Museums and Other Attractions

Washington, D.C., is also home to a number of museums celebrating national achievements and cultural milestones. The National Air and Space Museum houses historical icons like the original Wright Brothers Flyer from 1903, Charles Lindbergh's Spirit of St. Louis (the first plane to fly solo across the Atlantic Ocean), and the Apollo 11 command module (part of the first lunar mission in 1969). Other exhibits focus on the science and history of aviation and space flight, the Space Race with the Soviet Union during the Cold War, the use of air power in military conflicts, and the International Space Station. The museum also features the Albert Einstein Planetarium, an observatory, and flight simulators.

The National Museum of Natural History, a Smithsonian Institution, is a popular tourist site for families and young children. Notable permanent exhibits include the Hope Diamond, one of the most famous jewels in the world whose history traces as far back as 1666 France; Sant Ocean Hall and its 45-foot replica of a North Atlantic Right Whale; and the David H. Koch Hall of Human Origins, which traces the course of human evolution over six million years. The museum also features dinosaur exhibits, Egyptian mummies, daily tarantula feedings, and the Butterfly Pavilion. Admission into the museum is free, although certain exhibits do charge a fee.

The International Spy Museum is a must-see for any James Bond fan. Its exhibits explore the world of intelligence and espionage, their history, and the way they affect current events. On the factual side, the museum offers interactive exhibits covering the technique, technology, and history of espionage. Collections of historical objects include a poison dart umbrella designed by the KGB, a lipstick pistol, micro-cameras, and the Enigma machine that broke Nazi codes during WWII. Moving into the world of fiction, the bottom floor contains information about and props used in James Bond movies—including the Aston Martin DB5 from 1964's Goldfinger.

Finally, the Newseum is a journalism museum exhibiting iconic national and world events as they were covered in the media at the time. It uses films, interactive exhibits, Pulitzer-Prize-winning photographs, and static displays to show how media outlets broke news to the world. Notable draws are chunks of the Berlin Wall accompanied by news reports of its fall in 1991, newspaper articles about the assassination of President Abraham Lincoln in 1865, and a film retrospective about the events of Sept. 11, 2001.

During the last two decades, D.C.'s crime rate has dropped significantly from what it was. A 2010 report found that more than a quarter of the area's total reported crimes occurred in 5% of its city blocks. Most instances of murder, robbery, and theft occur in areas associated with poverty and gang activity, but they do still happen in other areas due to increased nightlife activity and more affluent residents. Once described in the 1990s as the "murder capital" of the United States, the murder rate fell to its lowest since 1961 in 2012 but has risen slightly since then. If you're concerned about your health, safety, or personal property, travel insurance can protect you from any significant financial losses you might incur if you were to take a wrong turn and end up in a bad neighborhood.

The title of "D.C.'s Signature Dish" is a source of sincere but lighthearted debate among natives. The Chesapeake region is known for its soft-shell crab, usually served as crab cakes or crab sandwiches. A half-smoke is a "local sausage delicacy" similar to a hot dog but larger, spicier, and more coarsely ground. D.C. is also home to an eclectic dining scene with celebrity chefs and restaurants catering to every type of palate imaginable.

Most travel insurance plans don't cover illness or injury claims that occur under the influence of any legal or illegal mind-altering substances. Even if you are on vacation, make sure to read and understand the fine print of your insurance policy before you take part.