Coronavirus coverage in travel insurance
July 4 2022: We are open from 8 AM to 5 PM CT. 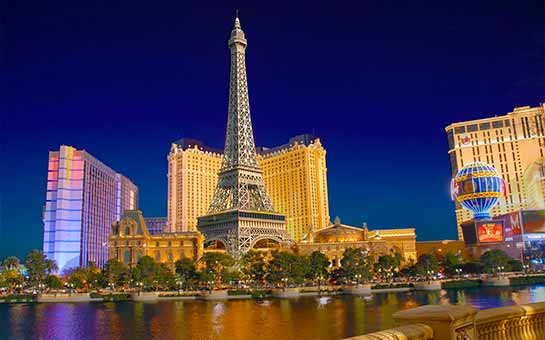 Nevada might best be known as the home of Las Vegas. Known as "The Entertainment Capital of the World", Vegas is a world-renowned tourist destination featuring casinos, theaters, street entertainment, restaurants, glitzy resorts, and more. But beyond Las Vegas lie a number of opportunities to enjoy the great outdoors. The area's natural diversity allows visitors to enjoy natural beauty within its national parks, lakes, mountains, and wide-open spaces, and it also provides an environment ideal for outdoor recreational activities like hiking, biking, fishing, and even skiing. As you're planning your trip, make sure to purchase Nevada travel insurance to protect you against any unexpected developments.

It's worth noting that most insurance plans don't cover injury or accident claims that occurred while the policy holder was under the influence of any legal or illegal mind-altering substances. They say that "What happens in Vegas stays in Vegas", but hospital bills will, indeed, follow you back home. Make sure to check your plan's substance-use policy before you choose to partake.

Best Places to Visit in Nevada

Las Vegas, famously called "Sin City", sees more than 42 million visitors annually. It's one of the top three destinations in the country for business conventions and contains the most AAA Five Diamond hotels of any city in the world. From the "Welcome to Fabulous Las Vegas" sign to the Caesar's Palace hotel resort, from the Colosseum concert venue to the Egyptian-themed Luxor hotel, icons of the city have cemented its reputation as a larger-than-life oasis of excess.

The Las Vegas Strip, colloquially known as "the Strip", is a 2.5-mile stretch of Las Vegas Boulevard packed with themed entertainment venues, luxury hotels, fine dining options, and glowing neon as far as the eye can see. Famous hotels along the Strip include the MGM Grand Hotel; the Bellagio Resort and its dancing fountains; the Mirage Hotel and its active volcano, which erupts at regular intervals; and the Paris Hotel, which includes a 46-story replica of the Eiffel Tower featuring an observation deck and restaurant.

Other sites in Vegas include Fremont Street, a pedestrian-only area featuring street performers, clubs, souvenir shops, and an overhead canopy of LED lights that stretches five blocks; the 550-foot High Roller Ferris Wheel; the National Museum of Organized Crime and Law Enforcement (the "Mob Museum"), the Neon Museum; and the Stratosphere, the tallest freestanding observation tower in the U.S.

Reno, on the Nevada-California border, is known as "The Biggest Little City in the World". With a population of only about 250,000 as of 2018, it's still the second-largest city in Nevada and a popular tourist destination in its own right. The city is largely known for its casino industry. But other highlights include the National Championship Air Races, featuring races between aircraft ranging from WWII-style planes to modern jets; the Great Reno Balloon Race, the world's largest fee hot-air ballooning event; and the National Automobile Museum, which houses more than 200 vehicles—among them cars owned by Elvis Presley, Frank Sinatra, and John Wayne.

The Hoover Dam, located about 45 minutes southeast of Las Vegas on the Arizona-Nevada border, was completed in 1936. It was the largest concrete structure ever attempted at the time of its construction. The dam stands 726 feet high and contains Lake Mead, the largest reservoir in the country. It provides hydroelectric power to Nevada, Arizona, and California. The facility offers self-guided and guided tours of the dam as well as guided tours of the power plant. The view of the lake and beyond from atop the dam is spectacular.

Lake Tahoe, located in the Sierra Nevada mountains on the border between Nevada and California, sits at an elevation of 6,225 feet. Excluding the five Great Lakes, it's the largest lake by volume in the U.S. Lake Tahoe is a popular tourist destination year-round. Summer visitors enjoy beaches, hiking, camping, jet-skiing, boating, scuba diving, and more. Winter visitors come for the skiing: Popular ski sites on the Nevada side of the lake include Heavenly Mountain Resort, Diamond Peak, and Mount Rose Ski Resort. The area also offers lakeside casino resorts.

Valley of Fire State Park, less than an hour northeast of Las Vegas, boasts 40,000 acres of red Aztec sandstone formations, outcroppings of limestone, petrified trees, and more. The area's rough floor and jagged walls appear to be on fire when sunlight hits at the right angle, creating a can't-miss panoramic view. The park's hiking trails wind you through breathtaking scenery, canyons, movie filming locations, and past intricate petroglyphs (artistic rock carvings) dating back as far as 2,000 years. The Visitor Center presents exhibits on the area's geology, ecology, and history. Campgrounds are outfitted with shaded tables, grills, and restrooms with showers, and there are also several picnicking areas for daytime visitors.

Great Basin National Park, nestled near the Nevada-Utah border, is known for its variety of natural formations. Its most popular feature is its groves of bristlecone pine trees, the oldest non-clonal organisms on earth. (The park was the home of Prometheus, the oldest known tree on the planet at a minimum of 4,862 years old, until it was cut down by a graduate student in 1964.) The Lehman Caves were designated as a national monument by President Warren G. Harding in 1922. The caves lie at the base of Wheeler Peak, which also contains Wheeler Peak Glacier. The park has several developed camping sites and is a popular spot for hiking and backpacking.

Safe travels, and may Lady Luck be on your side!