Our emails are down due to global outage at our hosting company, Rackspace. Please contact us through phone or chat. 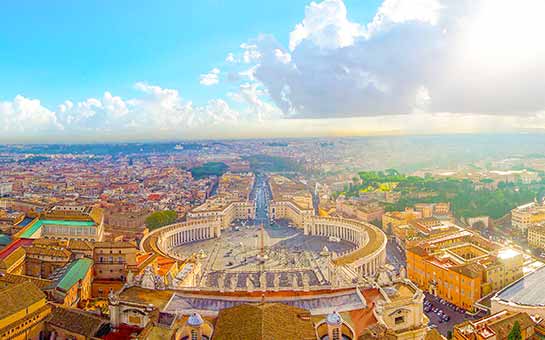 Vatican City has a number of world-famous attractions that appeal to Catholics, other Christians, and general tourists at large, from St. Peter's Basilica to St. Peter's Square to the Sistine Chapel to the Vatican Library. Tourism is a major source of revenue for the city's economy; it welcomes more than 5 million visitors per year. The Vatican draws a number of pilgrims during important events in the liturgical year, like Christmas or Easter, but given its placement within Rome, it's also a popular destination during summer travel season. If you're planning to visit, make sure you purchase Vatican City travel insurance to protect yourself against the unpredictable.

Vatican City is an independent city-state enclaved within Rome, Italy. With an area of just 0.44 km2, it's the smallest sovereign nation in the world. Vatican City is the seat of the Roman Catholic Church and, as such, is governed by the pope in his capacity as the Bishop of Rome and the head of the church. The pope is supported by the Holy See, the government of the church; the highest state officials are all members of the Catholic clergy. Vatican City citizenship is determined not by birth or nationality but by appointment to work in a given capacity for the Holy See. The Vatican has an estimated population of 1,000, making it the least-populous nation in the world, also.

Remember that any high-volume tourist destination—especially outdoors—comes with its fair share of pickpockets and purse-snatchers. In this case, because of the sheer number of visitors packed into such a small area, Vatican City has the highest crime rate per capita of any nation in the world, although the vast majority of reported incidents fall under the category of petty theft. Remember to keep track of your belongings and keep important items (passport, debit cards, ID card) beyond the reach of wandering hands. Be aware of your surroundings, and stay safe!

Construction on St. Peter's Basilica began in 1506 and finished in 1626. Designed by famous Renaissance figures including Michelangelo and Bernini, it's the premier example of architecture of the period and holds the distinction of being the largest church in the world. According to Catholic tradition, the basilica is the burial site of St. Peter, the leader of Jesus' apostles and the first pope. Legend further holds that his tomb lies directly underneath the basilica's altar. Many popes since then have been buried in the Vatican Necropolis below the church.

The church can accommodate a congregation of more than 60,000. The inside is resplendent with sculptures and works of art by Bernini, Michelangelo (including his famous "Pieta"), Giotto, and Borromini. The dome at the center rises 119 meters above the ground. If you feel up to some exercise, you can climb 330 steep steps within the dome to an outdoor viewing area that looks over St. Peter's Square.

St. Peter's Square, known locally as the Piazza San Pietro, is a large outdoor plaza just outside the basilica. The oval enclosure measures more than 370 meters long and is bordered by semicircular colonnades four columns deep that feature 140 statues of various Catholic saints. At the center of the plaza sits a 25-meter Egyptian obelisk brought to Rome by the Emperor Caligula in 39 AD; it moved to its current location in 1586. The square is known as a religious gathering place for Catholics. The far end of the square is a façade of the basilica and features a central balcony from which the pope delivers occasional blessings—and where senior members of the College of Cardinals appear to announce each new pope.

The Sistine Chapel is the chapel within the Apostolic Palace, the residence of the pope. It was built between 1473 and 1484 under the direction of Pope Sixtus IV. The Sistine Chapel is where the conclave convenes after the death (or, occasionally, resignation) of a pope to elect the next one. The side walls are decorated with frescoes of Biblical scenes painted by the greatest painters of the Renaissance era: Perugino, Botticelli, Rosselli, Signorelli, and more. Old Testament scenes cover the left wall; New Testament scenes cover the right. The frescoes on the ceiling were painted by Michelangelo between 1508 and 1512, and the most famous of them is the Creation of Adam. On the altar wall is another Michelangelo fresco portraying the Last Judgment as described in the Book of Revelation. These frescoes are today considered among the greatest achievements of European painting.

The Vatican Museums are a series of Christian art museums that contain the largest collection of ancient sculpture in the world. They contain more than 70,000 works amassed by popes throughout the centuries, 20,000 of which are on display. Combined, they're the fourth-most-visited art museum in the world, seeing more than 6 million visitors in 2017 alone. The museums have 54 galleries total. Highlights include works by Giotto, Leonardo da Vinci, Caravaggio, and Titian; the Raphael Rooms, featuring the famous "The School of Athens"; the Gallery of Maps; early Christian sarcophagi; and the Bramante Staircase, a double helix ramp of a staircase installed in 1932.

The Vatican Library was formally established in 1475. The library contains 1.1 million printed books, 75,000 codices, 25,000 handwritten books from the medieval period, and 8,500 incunabula (pamphlets printed before the year 1501). Primarily a research library for students of history, law, philosophy, and theology, it also features items for casual perusal. These exhibits include hand-illuminated Gospels, Biblical codices, ancient scrolls and papyri, and parchment manuscripts. It also includes a collection of pontifical coins and medals, and the Vatican Secret Archives (“secret” meaning “privately owned”, not necessarily “confidential”) contain another 150,000 items.

It's worth noting that local companies offer several variations of a "Skip the Line" tour, a guided walking tour of St. Peter's Basilica, the Sistine Chapel, and the Vatican Museums. Tickets must be purchased in advance, but they allow you to bypass the entrance lines at individual sites.

Given its location in the heart of Rome, you might not be surprised to learn that Italian food is the primary culinary offering of Vatican City. Local restaurants and cafes, large and small, of every price range, offer everything from spaghetti to fettuccini alfredo to pizza to risotto. Dessert options include genuine Italian gelato (ice cream), tiramisu, and cannoli.

Our licensed, experienced representatives will be happy to help you pick the plan that best fits your individual needs.