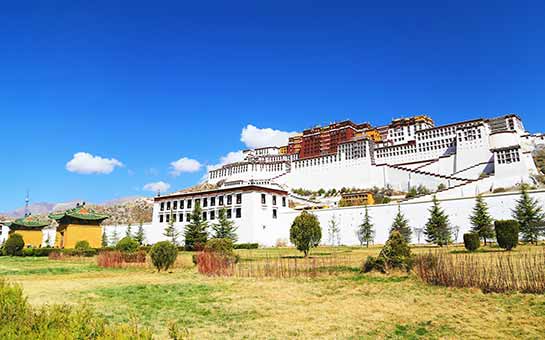 Tibet, formally known as the Tibet Autonomous Region, is an autonomous province in southwest China. It's often called the “Roof of the World” due to its location across the Tibetan Plateau and several mountain ranges that give the area an average elevation of more than 16,000 feet. Due to its rugged terrain, Tibet is sparsely populated, leaving many of its natural features and attractions undeveloped. Its capital is Lhasa, and its population as of 2010 was about 3 million people.

The area was closed to foreign tourists until the 1980s, but since then, the combination of its tranquil, majestic landscape and culture of religious mysticism has begun to attract its fair share of visitors. Mount Everest, the tallest mountain in the world, straddles the Tibet-Nepal border, making the Everest Base Camp a popular destination. The area also contains a number of religious destinations like Mount Kailash, Lake Manasarovar, the Tashilhunpo Monastery, and more. If you're considering a journey to Tibet, make sure to purchase Tibet travel insurance or

Lhasa, located in the south-central portion of Tibet, is a prefecture-level city that serves as the capital of the region. As of 2015, it had a population of just over 900,000. The city's primary draw for tourists is its culture steeped in the traditions of Tibetan Buddhism and monastic life.

The Jokhang Temple has been called the “spiritual heart of Tibet.” The oldest portion of the temple was built in the year 652, and the fifth and most recent renovation was in 1610. Visitors can worship a gilded bronze, life-size statue of the 12-year-old Sakyamuni Buddha; observe intricate Buddhist murals and cultural artifacts; meditate in one of its many chapels; or listen to monks engage in animated spiritual debates. As a sign of respect, please dress conservatively—clothing items like hats and short skirts aren't allowed.

The Potala Palace was constructed as a fortress and was once the winter residence for the Dalai Lama. The complex contains two palaces, the Red Palace and the White Palace. The palace has been a UNESCO World Heritage Site since 1994 and currently serves as a museum. Situated on the “Red Hill,” the highest point in Lhasa, the complex overlooks the rest of the city and attracts millions of tourists each year. Highlights include the throne room, the meditation room, the Dalai Lama's personal study, murals and spectacular Tangkas (Buddhist paintings on cotton or silk), golden tomb stupas of past Dalai Lamas, various precious statues of the Buddha, and the sparkling golden rooftops.

Namtso Lake, about a 6-hour drive north of Lhasa, is the highest saline lake on Earth at an elevation of 15,479 feet. Regarded as one of the most beautiful spots in the Nyenchen Tanglha Mountain Range, Namtso is one of the holy lakes that draws Tibetan pilgrims and hermits—and, more recently, tourists. The lakeshore is a popular place for walking, bicycling, trekking, and sightseeing. The drive to and from Namtso offers views just as spectacular as the lake itself, rising and falling along the high passes, peering at snowy mountains in the distance.

The Tashilhunpo Monastery, located in Tibet's second-largest city of Shigatse, was founded in 1447 by the first Dalai Lama. Tashilhunpo is the traditional seat of the Panchen Lama. The monastery sits on the southern slope of Nyiseri Mountain and is open for visitor tours. Highlights of the visit include the beautiful architecture of historic sites like Coquen Hall and the Chapel of Jampa; walking a scenic kora (a type of pilgrimage) around the complex; the tombs of the fourth and tenth Panchen Lamas; and observing Buddhist monk debates and scripture chanting. It's also the site of the Tashilhunpo Monastery Thangka Festival—also known as the Buddha Exhibition Festival—one of the most important religious festivals in the region.

Mount Everest has two main base camps, the South Base Camp in Nepal and the North Base Camp in Tibet. First used in 1924 by a British Everest expedition, the North Base Camp has two small permanent structures and an army base. It is necessary to acquire a permit from the Chinese government to visit the camp; these permits are available through travel companies in Lhasa as part of a package including a vehicle, driver, and guide. Any private vehicles are still required to stop about 2.5 miles from the camp, and visitors must take a Chinese-government-run bus or trek the rest of the way. Located at an elevation of about 17,000 feet, the base camp features a sign for tourist photos, overnight accommodations in a small tent city or at the Rongpuk Monastery Guesthouse, and a combination tea house / hotel.

If your ambition is to climb Mount Everest instead of merely visiting the base, you should make sure to purchase hiking and mountaineering insurance, available as part of a hazardous sports travel insurance package. The risk of mountain climbing (especially one as daunting as Everest) is too great for a basic insurance plan to cover, but purchasing the coverage will protect you should the worst happen. Contact us to ensure you have the best hazardous activity travel insurance plan for your needs.

Mount Kailash is one of the most famous holy mountains in Asian history. According to Hindu tradition, Lord Shiva lives at its summit in a state of perpetual meditation. Similarly, Buddhists believe that the summit is home of Buddha Demchok, who represents supreme bliss. Lake Manasarovar (in the Tibetan language, “invincible lake”) is one of the highest freshwater lakes in the world. Hindus believe that drinking the lake's purifying water cleanses a person of his or her sins. Both Mount Kailash and Lake Manasarovar are sites of religious pilgrimage that attract the faithful from all around the world.

Tibetan cuisine is based largely on the available resources from its climate. Common ingredients include noodles, goat, yak, mutton, butter, and yogurt. The staple crop of Tibet is barley. Tsampa, flour milled from roasted barley, is one of the area's staple foods and is usually mixed with water, beer, Tibetan butter tea, or made into a porridge. Sha phaley (meat and cabbage in bread) is another go-to meal choice, as is a Tibetan bread called balep. Thenthuk is a soup made with noodles and vegetables. Dairy products like cheese, yogurt, and butter are also common, leading to staples like soft cheese curds, hard cheese, and extra hard cheese made from solidified yogurt. The salty beverage of butter tea—made from tea leaves, yak butter, water, and salt—is as common as coffee, and most Tibetans will start off each day with several bowlfuls for its warmth and caloric energy.

There's a lot to consider when choosing a health insurance plan. It's important to understand why travel insurance is necessary and to separate fact from fiction. Make sure your coverage matches your destination. In a remote, high-altitude environment, consider whether you'd need a service like emergency medical evacuation. Many travel insurance companies don't cover trekking or mountaineering above a certain altitude, meaning that even if your planned activity isn't all that strenuous, you'd still need a hazardous sports travel insurance package to stay covered at that elevation. Make sure to read through and understand your policy so that you know what is and isn't covered before you leave.

As always, we have a staff of experienced, licensed representatives happy to help pick the plan that best fits your individual needs. If you have any questions, feel free to call +1 (866) INSUBUY or +1 (972) 985-4400 or send an email to [email protected] to get in touch with one of our licensed, experienced representatives.