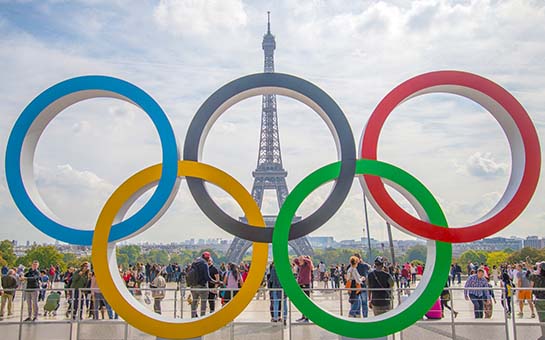 The 2024 Summer Olympics, officially known as the Games of the XXXIII Olympiad, and colloquially known as Paris 2024, is an upcoming international multisport athletic competition set to take place in Paris, France from July 26th to August 11th, 2024.

2024 will mark the third time Paris has hosted an Olympic Games. It previously played host to the Games in 1900 and 1924. France has also hosted the Winter Olympics on three previous occasions: 1924 in Chamonix, 1968 in Grenoble, and 1992 in Albertville.

The Olympic Games are an athletic tradition that dates back to the times of Ancient Greece. From the 8th century BC to the 4th century AD, athletes from around the world would converge on the ancient city of Olympia once every four years to compete in events such as chariot racing, boxing, wrestling, and discus throwing. These ancient games were held in honor of the Greek god Zeus, and gained mythological and religious importance. The modern incarnation of the Olympics began in 1896. Both the Summer Olympics and Winter Olympics were held on the same year every four years until the 1990s. In 1986, the International Olympic Committee (IOC) voted to begin alternating the games by two years, leaving four years between each set of games, but only two years between each Olympics.

Paris 2024 is set to feature 32 sports encompassing 329 events. It will mark the debut of breakdancing as an Olympic sport, as well as surfing, sport climbing, and skateboarding, which debuted in 2020. Notably, the sports of baseball, softball, and karate will no longer be included in the 2024 Summer Olympics.

The majority of the Olympic events are scheduled to take place either in Paris, or in surrounding suburbs such as Le Bourget, Versailles, and Nanterre. The Grand Paris zone, which includes the massive Stade de France, will feature many of the premier events such as football, track and field, rhythmic gymnastics, aquatics, and the opening and closing ceremonies. The Paris Centre zone will feature the largest variety of sports, such as basketball, boxing, tennis, weightlifting, artistic gymnastics, and contact sports such as taekwondo. The Versailles zone will be home to all equestrian events, modern pentathlon, golf, mountain biking, track cycling, and BMX. The remaining sports such as canoeing and kayaking, sailing, surfing, and many more football matches will take place at venues around the city. L'Île-Saint-Denis will serve as the Olympic Village, and Le Bourget will play host to the Media Village, International Broadcast Centre, and Main Press Centre.

The Art Deco-inspired main emblem of the 2024 Summer Olympics and Paralympics is a representation of Marianne, a figure known as the national personification of France. The image pays tribute to the 1900 Summer Olympics in Paris, which were the first Games that allowed women to participate. Notably, this will mark the first time both the Olympics and Paralympics have shared the same logo. It is said that this is to mark the shared ambition of the two events.

Tickets for French fans will most likely begin being awarded via lotteries starting in 2023. If past Olympic Games are any indication, just 30% of the tickets will be reserved for international spectators. If you plan to attend Paris 2024 and are traveling from abroad, you are encouraged to keep a close eye on the IOC website to reserve your tickets as soon as vendors are announced.

As an international tourist destination, Paris is replete with lodging and hotel options, including famous hotels such as Relais Christine, Hôtel Plaza Athénée, and Le Bristol Paris. However, as with any Olympics, hotel and Airbnb options will fill up fast. Attendees are encouraged to book their rooms as early as possible, and be prepared to look for lodging in outlying suburbs, cities, and towns.

Paris experiences a mild, pleasant climate in the summer, with few natural risks other than fog and rain. However, visitors should remain wary of pickpockets, particularly in crowded areas such as sporting venues. Crowds themselves are also a concern. Paris is a busy city on any given day; add in scores of international sporting fans, and you'll have to factor in extra travel time no matter where you're headed.

Before any international trip, it's essential that you purchase travel insurance or travel medical insurance. Travel insurance can provide coverage for prepaid, nonrefundable expenses, and can cover situations like trip cancellation, emergency medical care, trip interruption, lost luggage, emergency cash transfers, rental car coverage, and flight accidents. Travel medical insurance provides medical coverage while you're traveling abroad. Standard benefits can include coverage for necessary medical treatment, emergency medical evacuation/repatriation, return of mortal remains, accidental death and dismemberment, and ancillary benefits like ID theft assistance, terrorism and natural disaster relief. Be sure to check the fine print on your plan for all the details.

Perhaps you're unsure whether you should purchase travel insurance or travel medical insurance. Maybe you don't know what to look for when choosing a plan. Perhaps you're traveling on a budget and aren't sure if you can shoulder the additional expense. Whatever the case, our licensed and experienced representatives will be happy to answer your questions, and help you pick the best plan for your needs. See you in Paris.