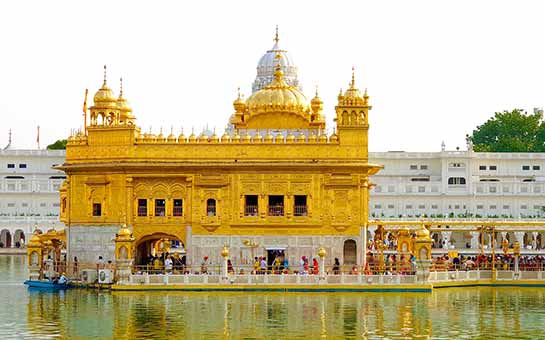 Religious pilgrimages present the opportunity for spiritual renewal and growth. The idea of journeying to unknown lands for the sake of a higher cause, in search of meaning, is common to all world religions. Some wander without any particular destination, but many more travel to a specific place associated with a major figure or event from their faith. The modern age of travel has made trekking to a particular religious destination more accessible to anyone in the world than ever before. Below is a brief overview of some major, established pilgrimages from various world religions.

As always, if you’re traveling internationally, make sure to purchase travel insurance or travel health insurance to protect yourself against any unexpected incidents, illnesses, or injuries that might occur. Insurance may seem like a small piece of the puzzle, but it will allow you the peace of mind to focus on the real purpose of your trip.

Tradition holds that the founder of Buddhism, Siddhartha Gautama, was born in the city of Lumbini in Nepal between the 6th and 4th centuries BCE. According to Buddhist tradition, upon his birth, he announced “This is my final rebirth” and took seven steps, under each of which a lotus flower bloomed. Following his death, Lumbini almost immediately became one of the four major Buddhist pilgrimage sites. (The other three are Bodh Gaya, the place of his enlightenment; the Deer Park in Varanasi, where he preached his first sermon, and Kushinara, his place of death.) It was even visited by Emperor Ashoka of the Maurya Empire, who erected a pillar verifying its authenticity in 249 BCE.

In Buddhism, pilgrimage to Lumbini and other sites is encouraged but not required. Lumbini was declared a UNESCO World Heritage Site in 1997. Other points of interest in Lumbini include the Maya Devi Temple, dedicated to Buddha’s mother and located at the spot where he was supposedly born; the Puskarini (Holy Pond), where his mother bathed before giving birth and where the young Buddha had his first bath; and the Pillar of Ashoka, one of the earliest known stone sculptural remains on the Indian subcontinent.

The Camino de Santiago is a traditional Christian pilgrimage dating back to the Middle Ages. It consists of a network of routes from various starting points around Europe leading to the city of Santiago de Compostela, the capital city of the province of Galicia in northwest Spain. The city is said to be the final resting place of St. James the Great, one of Jesus’ twelve apostles, and his supposed remains are housed in the city’s cathedral. A twice-daily Pilgrim’s Mass at the Cathedral of Santiago de Compostela welcomes those who have completed the journey.

Some travel by foot, others by bicycle, and some even by horseback. Most purchase and use a pilgrim’s passport, a document that provides them overnight accommodations along the way. The passport is stamped with the official St. James stamp of each town and verifies that the pilgrim has followed an official route. Pilgrims who arrive in Santiago de Compostela present their passport in order to receive their “Compostela,” a certificate of completion.

The Camino de Santiago has regained popularity in recent years among hikers, cycling enthusiasts, and organized tour groups. Many see it as a combination of a spiritual journey and a physical challenge. Regardless of their motivations, more than 300,000 people complete the pilgrimage each year. If your plan is to hike or cycle along the Camino, you might consider purchasing hazardous sports travel insurance in case there are any unexpected injuries along the way.

Hindu pilgrimages date at least as far back as 1500 BCE. They can be taken to honor the pilgrim’s ancestors or the recently deceased; bond with strangers in a foreign land with a common ritual; or to pursue wishes like health, wealth, progeny, and deliverance after death. One of the most sacred pilgrimage destinations in Hinduism is Mount Kailash and the nearby Lake Manasarovar, located in Tibet.

Hindus believe that Lord Shiva, the destroyer of evil and sorrow, resides at Mount Kailash’s summit in a state of perpetual meditation with his wife, Parvati. There have been no recorded attempts to climb Mount Kailash; it is off-limits according to both Hindu and Buddhist beliefs. Instead, the ritual for pilgrims is to walk clockwise around the base of the mountain. Pilgrims circumambulate the mountain by foot, pony, or yak, and it takes about three days of trekking at heights between 15,000–18,200 feet, camping for two nights on the way and covering about 32 miles.

At an elevation of 14,947.5 feet, Lake Manasarovar is one of the highest freshwater lakes in the world. Hinduism indicates that bathing and drinking water from the lake will cleanse the pilgrim of all sins. It’s also the source of several major rivers in Asia.

One of the Five Pillars of Islam is the hajj, a pilgrimage to the holy city of Mecca, Saudi Arabia. The religion requires that every adult who is physically and financially able to make the journey do so once in his or her lifetime. The idea of the pilgrimage was established by the Prophet Muhammad and is written in the Quran. About two million people perform the hajj each year, and those who complete it may add the title “Al-Hajji” to their names.

The hajj must be taken during the last month of the Islamic year. Once arriving within about 6 miles of Mecca, the pilgrims dress in white seamless garments (for men) or similar sewn garments (for women) and have entered a state of holiness known as ihram. The hajj typically lasts five or six days. Rituals during this period include walking seven times around the Ka’bah (the sacred shrine located in the Great Mosque), touching the Black Stone in the Ka’bah’s eastern corner, traveling seven times between Mount Safa and Mount Marwah, and throwing three pebbles at three walls in the city of Mina in a symbolic stoning of the devil.

The Western Wall, located in the Old City of Jerusalem, is the only remaining piece of the Second Temple of Jerusalem, destroyed by the Romans in the year 70 CE. The Wall is one of the holiest sites in the Jewish faith and has stood as a place of pilgrimage for more than 2,000 years. Ownership of the Wall has long been a point of contention between Jews and Arabs, as it forms part of a larger wall that surrounds the Muslim Dome of the Rock and Al-Aqsa Mosque. The Wall and the plaza in front of it have become a permanent place of worship and prayer. Men and women pray in separate groups, and all are expected to cover their heads and dress conservatively. When leaving, it is customary to walk backwards away from the Wall. And on the Sabbath, it is prohibited to enter the area with electronic devices.

Customs past and present at the Western Wall include reciting specific prayers, rending garments in mourning of the Temple that once stood there, and sliding slips of paper inscribed with prayers or petitions into the cracks between stones. Every spring, the prayers are removed with wooden sticks dipped in the ritual bath and buried at the Mount of Olives Cemetery in Jerusalem.

Sikhism is a more recent world religion, based on the spiritual teachings of Guru Nanak in the Punjab region of the Indian subcontinent at the end of the 15th century CE. Guru Nanak was followed by a succession of nine other Gurus, whom Sikhs believe were all inhabited by a single spirit. Following the death of the 10th Guru, Guru Gobind Singh, the spirit transferred itself to Sikhism’s sacred scripture, the Guru Granth Sahib. There are currently about 25 million Sikhs worldwide, most of whom live in Punjab.

Two of the holiest sites in Sikhism are the Gurdwara Darbar Sahib Kartarpur, also known as Kartarpur Sahib, located in Punjab, Pakistan; and the Golden Temple in Amritsar, Punjab, India. The Sahib Kartarpur is a Gurdwara—a place of Sikh assembly and worship—that was built on the historic site where Guru Nanak, the founder of Sikhism, lived for about 20 years after his missionary travels and established a Sikh commune. The shrine was built in 1925 and renovated in 2004. As of 2018, the Government of Pakistan allows 5,000 Indian Sikhs per day to cross the border visa-free to visit the shrine.

The Golden Temple, located in Amritsar, Punjab, India, is the holiest of the Gurdwaras and the faith’s most important pilgrimage site. Construction was completed in 1589, and a copy of the Guru Granth Sahib was installed in 1604. The temple surrounds a man-made pool that was completed by the fourth Guru in 1577. The complex’s square shape with four entrances symbolizes that the worship center is open to all, regardless of caste or creed. The temple has been destroyed and rebuilt numerous times throughout its history. It was rebuilt with marble and copper in 1809 and overlaid with gold foil in 1830, leading to its current name.