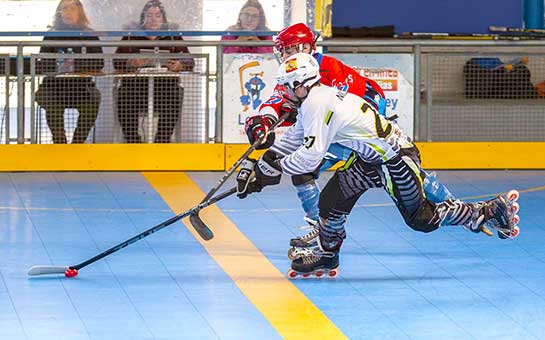 Roller hockey is mostly popular in Britain. Other variations, like inline hockey, are also played in countries where it is too cold to play hockey outdoors.

There are some chances of getting injured while playing roller hockey. If you want to play while you are traveling, then roller hockey travel insurance can protect you in the event of any unexpected accidents or injuries.

Playing roller hockey can be thrilling because it has an edge over traditional hockey. Each team tries to win by shooting the puck into the opponent team’s goal. The team that scores the highest number of goals wins the match. There are four to five players on each team, and the game is played in three periods of fifteen minutes.

Players can get quite aggressive while trying to score. It is important to have a good level of fitness and agility while playing roller hockey.

Although roller hockey is a considerably safe sport, there are a few things to watch out for.

Since roller hockey is played on a hard surface, typically cement, a fall can lead to severe injuries. You could fracture a bone on impact with the hard ground.

Roller hockey is a contact sport, but body checking is prohibited in professional tournaments. However, if you are playing the game for recreation, these rules might not hold. Players from the opposing team often try to tackle you to score a goal, and you could get injured in the hustle.

The puck could inadvertently hit you in the head or the face. This is why it is important to wear proper gear like helmets and face guards. Additionally, hockey sticks could also be a source of injury if the players do not handle them well.

With travel insurance for roller hockey, the treatment expenses for injuries resulting from any of these scenarios would be covered by the insurance company.

While playing the sport, make sure that it is organized in a registered rink or stadium where you will get access to the right types of equipment and safety gear. Do not play the sport without covering your knees, head, and face, because a rogue push or a sudden fall could lead to cuts, bruises, contusions, or even a broken bone.

If you are injured in a foreign country, then the treatment costs can be very high. Depending on the nature of the injury, and depending on your location, you might have to be medically evacuated for better treatment. Roller hockey travel insurance can help cover the costs if such conditions are included in the plan. Be sure to read the fine print before purchase travel insurance for roller hockey.