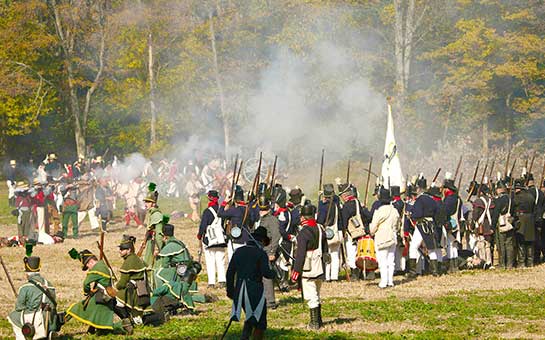 Do you ever feel like you were born in the wrong era? If your heart longs to be in a Viking raid or atop a hill standing your ground with English longbowmen, then historical battle reenactment would be perfect for you.

Historical reenactment is a popular pastime for history buffs and amateur reenactors. The idea is to accurately represent historical battles and events in an organized manner for both the participants and the audience. It aims to provide an entertaining spectacle in an educational context.

Historical battle reenactment may sound tame, but there are plenty of risks involved. Before you sign on for a session, do secure yourself with hazardous sports travel insurance.

Battle reenactments have a long history. They were first popularized in ancient Rome, where famous battles would be reenacted in the Colosseum as a part of the great games. However, those were not mock battles—the gladiators fought for their lives. It regained popularity during the 18th century in England. The largest re-enactment was in 1998 with more than 15,000 participants recreating the Battle of Gettysburg from the U.S. Civil War.

Reenactors are adamant about historical accuracy. You will have to wear clothing and use weapons from the particular era you are representing. That means medieval battles will be fought with real weapons and armor. A blunt ax or a sword can cause severe damage if it makes contact with unprotected skin. Arrows can break in the bow, causing splinters and shrapnel that could injure anyone near the archer. Reenactors are usually trained before they are allowed to take up such weapons.

Battles from the gunpowder era pose a different challenge. While no live shots are fired, the gunpowder being used for cannons and muskets is still real. If any mistakes are made during such a battle reenactment, it can result in horrible injuries.

Mock dying in a battle reenactment presents its own challenges. Once “killed”, reenactors play dead for the remaining duration of the battle, which could mean lying in the sun for hours. Dehydration is a major problem in this situation. You can also get injured if you “die” while riding a horse and have to fall off. There is also a risk of getting trampled by advancing infantry troops.

Participating with trained and seasoned reenactors minimizes the risks but does not completely do away with them. Bruises, cuts, sprains, and broken bones are common injuries sustained during reenactments.

Another significant risk is dehydration. The more earnest reenactors refuse to break character by drinking water while they play dead. This can cause your body to slowly shut down. In some rare cases, reenactors in full steel plate armor have been struck by lightning. So, if there is a storm, avoid carrying metal.

Battle reenactment is a hazardous sport. Secure yourself accordingly with hazardous sports travel insurance so that any injuries sustained do not affect your finances.