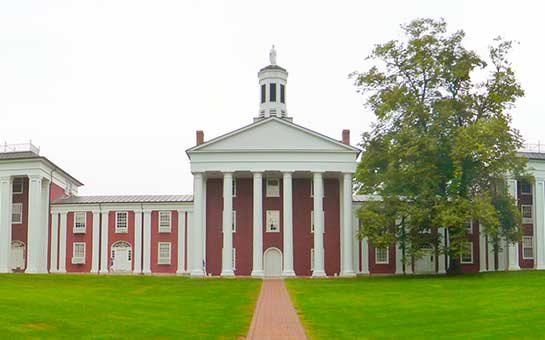 Washington and Lee University (W&L), located in Lexington, Virginia, was established in 1749. It ranks among the ten oldest higher-education institutions in the United States. It was founded as Augusta Academy but became Liberty Hall in 1776. It moved to its current location in 1780, and two years later, it was chartered as Liberty Hall Academy and gained the ability to grant degrees. By 1796, the school was about to go under financially when George Washington donated $20,000 worth of stock, and the trustees changed the school’s name to Washington Academy in his honor. In 1865, following the American Civil War, former Confederate General Robert E. Lee accepted the role as president of the university. He served until his death in 1870, after which the trustees voted to again change the school’s name to Washington and Lee University.

Today, W&L enrolls more than 2,000 students and counting each year. The school colors are blue and white, and its athletic nickname is The Generals.

The school offers about 40 bachelor’s degrees, while its only graduate degrees come through the School of Law. The undergraduate program is divided into two colleges: The College, which focuses on liberal arts and the humanities; and the Williams School of Commerce, Economics, and Politics.

One notable fixture on campus is the Lee Chapel & Museum, the burial site of General Lee and many of his family members. Lee’s horse, Traveller, is buried outside. The chapel serves as a formal gathering place for important academic events. The basement contains a museum featuring exhibits about George Washington and Robert E. Lee, their families, and the university itself.

Two of the most well-known traditions at W&L are the Fancy Dress Ball, a formal black-tie event and dance, and the Washington and Lee Mock Convention. The convention is held every four years for whichever political party does not hold the presidency. It has correctly predicted that party’s nominee in the upcoming election for 18 out of the last 23 national elections.

There are no specific requirements mentioned for J-1 exchange visitors, scholars, or students. There is no mention of a waiver on the university website. However, all J-1 visa holders have insurance that meets the minimum requirements set by the Department of State for the duration of their program.