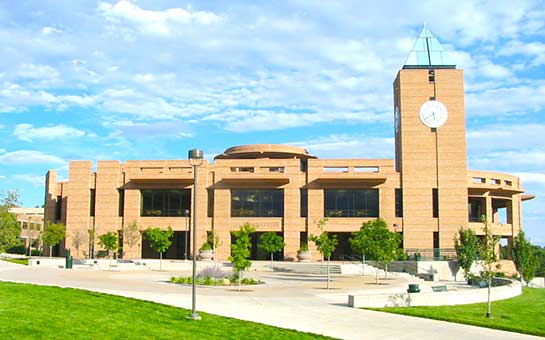 The University of Colorado Colorado Springs (UCCS), located in Colorado Springs, Colorado, was established in 1965. It was built on the grounds of the Cragmor Sanitarium, which its executive director sold to the University of Colorado for $1 in 1964. Between 1965 and 1972, it operated as a branch campus of CU Boulder; it was recognized as an independent district campus in 1974. It was largely known as a commuter school until the first on-campus student housing opened in 1996. It merged with the Beth-El College of Nursing in 1997. Today, UCCS offers about 45 undergraduate degrees, 23 graduate degrees, and 5 doctoral degrees and counting in its six colleges and schools: the Helen and Arthur E. Johnson Beth-El College of Nursing and Health Sciences; the College of Business; the College of Education; the College of Engineering and Applied Science; the College of Letters, Arts and Sciences; and the School of Public Affairs.

UCCS enrolls more than 12,500 students and counting each year. The school colors are black and gold, and its athletic nickname is the mountain lions.

The university is home to the El Pomar Institute for Innovation and Commercialization (EPIIC); the National Institute for Science, Space and Security Centers; and the Center for Space Studies, whose projects include satellite thermal modeling, tethered satellite orbit determination, and emergency response operations system integration.

The university’s College of Engineering and Applied Sciences has partnerships with national institutions like Intel, Boeing, Lockheed Martin, the U.S. Department of Energy National Laboratories, and the U.S. military. UCCS is also home to Writers’ Forum, a national literary journal founded in 1974.

UCCS states that students on a J-1 visa must meet standard requirements. Scholars may be on a program such as the Fulbright Program and come to the school on funding from other sources. They are still required to meet the minimum requirements set in place by the U.S. Department of State. These requirements include coverage of $100,000 per incident; a maximum deductible not to exceed $500; medical evacuation coverage of $50,000; and repatriation coverage of $25,000.

J-1 students are required to have insurance that meets the U.S. Department of State Requirements.

F-1 students are highly encouraged to have health insurance that provides coverage for their study in the U.S.