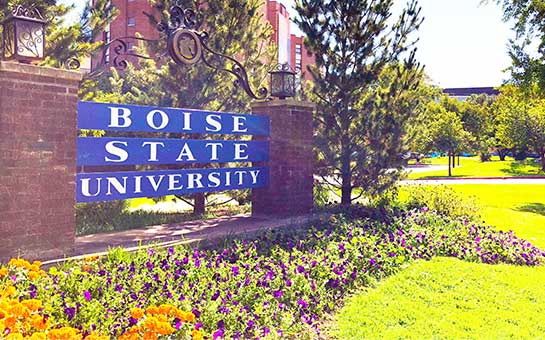 Boise State University, located in Boise, Idaho, was established in 1932. It was founded by the Episcopal Church as Boise Junior College. It became a four-year college in 1965, entered the state system of higher education as Boise State College in 1969, and gained its current name in 1974. It also operates satellite campuses in Nampa, Idaho; Twin Falls, Idaho; Coeur d’Alene, Idaho; and at Mountain Home Air Force Base in Mountain Home, Idaho. BSU enrolls more than 25,000 students and counting each year. The school’s colors are blue and orange, and its athletic mascot is the bronco.

Notable research programs based at BSU include the Idaho Council on Economic Education, the Center for Idaho History and Politics, and the Raptor Research Center. The school offers several unique interdisciplinary minor programs like addiction studies, Canadian studies, conflict management and dispute resolution, legal assistance, and gender studies. It’s also known for publishing the Western Writers Series, which highlights pieces about the American Frontier and the American West.

One noteworthy campus feature is the blue Astroturf inside Albertsons Stadium, stylized as “THE BLUE.”

The U.S. Department of State requires J-1 exchange visitors and J-2 dependents to have appropriate health insurance for the duration of the program. The minimum requirements for coverage include medical benefits of $100,000 per incident; a maximum deductible not to exceed $500; medical evacuation coverage of $50,000; and repatriation coverage of $25,000.

All F and J international students are automatically enrolled into the school’s insurance plan. The insurance provider does not allow for waivers.

For more information, contact us at our office. This information may be subject to change.