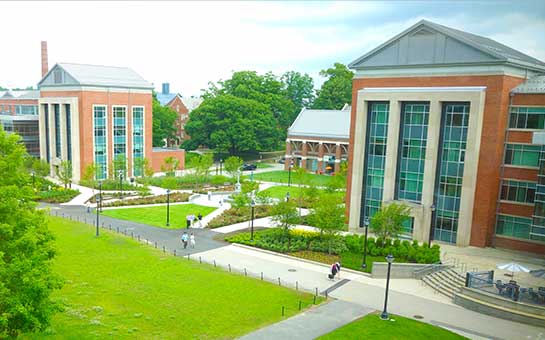 The University of Connecticut (UConn), located in Storrs, Connecticut, is a public research university established in 1881. It was founded as the Storrs Agricultural School, named after two brothers who donated the land and initial funding for the school. In 1893, the first women were admitted, and it officially became Connecticut’s land-grant college, along with a name change to Storrs Agricultural College. It became Connecticut Agricultural College in 1899, Connecticut State College in 1933, and finally gained its present name in 1939. Today, UConn enrolls more than 30,000 students and counting each year. Its colors are navy blue, white, and gray, and its athletic nickname is the huskies.

UConn is a National Sea Grant and a National Space Grant university. Noteworthy school facilities include the National Undersea Research Center, the Institute for Materials Science, the State Museum of National History, and the William Benton Museum of Art.

Longstanding campus traditions include “The Rock,” a rock coated with thousands of layers of paint promoting various student events throughout the years; OOzeball, an annual mud volleyball tournament; the Lip Sync, a yearly Homecoming event, and the annual Spring Concert, which has drawn as many as 10,000 attendees.

The U.S. Department of State requires all J-1 and J-2 visa holders at the University of Connecticut to have insurance for the duration of their exchange program. Insurance requirements include medical benefits of $100,000 per accident or illness, $25,000 for repatriation of remains, $50,000 for medical evacuation, and a $500 maximum deductible per accident or illness.

Most full-time students at the University of Connecticut are automatically enrolled into the UConn student health insurance plan. Students who have comparable health insurance through their family or home country must complete a Health Insurance Waiver.