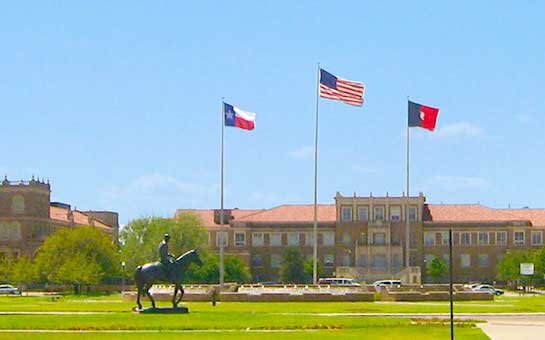 Texas Tech University was established in 1923 in Lubbock, Texas. The university is the largest in the western two-thirds of the state of Texas, and it’s the only campus in the state that houses a university, a law school, and a medical school. It was originally known as Texas Technical College until the Texas State Legislature approved the name change, which took effect in 1969. The school’s colors are scarlet and black, and its athletic nickname is the Red Raiders.

One striking feature of the campus is its Spanish Renaissance architecture; American author James Michener called it the “most beautiful west of the Mississippi until you get to Stanford.” Notable university traditions and landmarks include the Carol of Lights concert each December; the “Double T” logo; and the statue of actor Will Rogers on his horse, Soapsuds.

J-1s can purchase insurance from the school or from an outside organization, but they require benefits greater than those of the U.S. Department of State. They also state that the insurance plans offered through the school do not cover medical evacuation and repatriation, so additional insurance must be purchased to cover those requirements. Insurance benefits must cover at least $100,000 per accident or illness for medical expenses, $50,000 for medical evacuation, and $25,000 for repatriation of remains. Insurance policies under these requirements may require a reasonable waiting period for coverage of pre-existing medical conditions, require the exchange visitor to pay up to 25% of the covered benefits per accident or illness, but shall not unreasonably exclude coverage of perils inherent to the activities of the exchange program.

For students on F-1 visa and J-1 international students, students are required to purchase insurance through the university. There is no mention of a waiver.