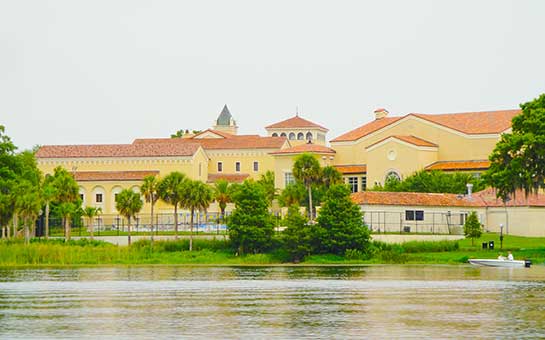 Rollins College, located in Winter Park, Florida, was founded in 1885 and is the oldest higher-education institution in the state. It was named after Chicago businessman Alonzo Rollins, who made substantial donations to the school in its early years and served as a trustee and its first treasurer. U.S. President Franklin D. Roosevelt received an honorary degree in literature during a visit to campus in 1936. Rollins enrolls about 3,000 students annually. The school’s colors are Rollins Blue and Rollins Gold, and the athletic nickname is the tars.

There are several noteworthy features on campus. One is Mayflower Hall, which houses a 16-inch wooden beam from the original Mayflower ship. Another is the Peace Monument, which was erected in 1938 and consists of a German artillery shell surrendered by Germany at the end of World War I. There’s also the Walk of Fame, which circles through campus and is made up of stones from places associated with famous people. The Walk includes stones connected to figures like George Washington, Calvin Coolidge, Ralph Waldo Emerson, St. Augustine, and Charles Dickens.

Campus traditions include Fox Day, a day each spring on which the President announces the surprise cancellation of classes, and the two-week Winter Park Bach Festival, the third-oldest continuously operating Bach festival in the country.

Rollins College requires health insurance for all international students. International students on F-1 and J-1 visas are automatically enrolled into the school’s insurance plan. Students with an alternate, comparable insurance policy may submit a waiver. J-1 scholars and J-2 dependents are required to prove that they meet the minimum health insurance standards as described in federal immigration regulations. These minimum requirements include medical benefits of at least $100,000 per accident or illness, at least $50,000 in medical evacuation benefits, at least $25,000 in benefits for repatriation of remains, and a deductible of $500 per accident or illness. A J-1 scholar may purchase the school’s plan for his or her J-2 dependents or purchase a plan from another company to cover their family.