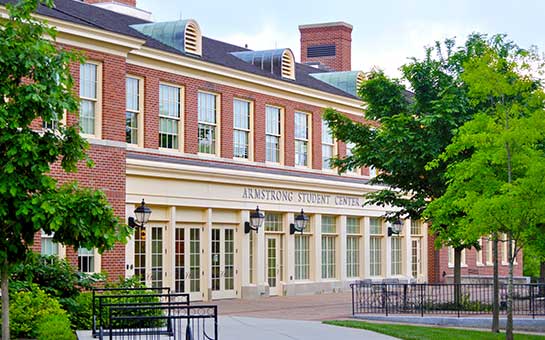 Miami University, located in Oxford, Ohio, is a public university that was established in 1809. It was founded based on an Act of Congress mandating the establishment of a university in the Miami Valley northwest of the Ohio River. The school currently maintains ties with the Native American Miami Tribe, now located in Oklahoma. Classes began in 1824 with an inaugural enrollment of 20 students and three faculty members. Due to low enrollment and financial downfalls, the school closed from 1873–1885. Women were first granted admission in 1888, and the first African-American student graduated in 1905. Today, Miami University enrolls about 20,000 students and counting each year. The school colors are red and white, and its athletic nickname is the RedHawks.

The campus is home to several historic landmarks. The William Holmes McGuffey Museum, built in 1833, is the home of the famed author who wrote the first four McGuffey Readers, a series of educational texts. The Zachariah Price Dewitt Cabin is a log cabin built by the city’s earliest pioneers in 1805. Two of the campus dorms, Elliott and Stoddard Halls, are the oldest continuously used dormitories in Ohio. Other points of interest on campus include King Library and the Simpson-Shade Guest House.

Miami University has standard insurance requirements for J-Visa holders. J-1 scholars and their J-2 dependents are required to have health and accident insurance, repatriation coverage, and medical evacuation coverage for the entire duration of the J program. Coverage must last for the duration of the stay and not exclude any perils inherent to the J-1 program. U.S. Department of State requirements include coverage of $100,000 per incident; a maximum deductible not to exceed $500; medical evacuation coverage of $50,000; and repatriation coverage of $25,000. J-1 exchange visitors are free to purchase their own insurance policy that meets all of the minimum standards.