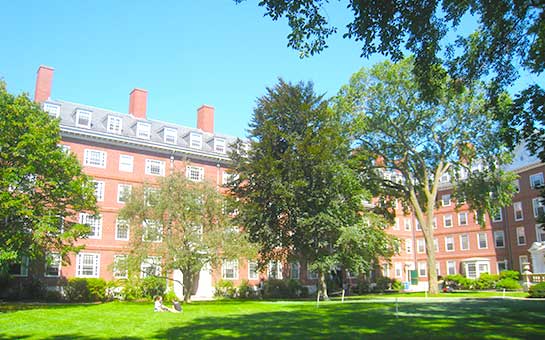 Harvard University, established in 1636 and located in Cambridge, Massachusetts, is the oldest higher institution of learning in the United States. It was named after its first benefactor, Minister John Harvard, who left his library and half his estate to the new school when he died in 1638. The famous Harvard coat of arms is a shield bearing the Latin word “veritas,” which means “truth.” The school’s color is crimson, and its athletic nickname is the Harvard Crimson.

Harvard Library is the largest academic library in the world and includes more than 20 million books, 400 million manuscript items, 10 million photographs, and 124 million archived web pages. Its 20 museums and digital collections hold more than 28 million works of art, artifacts, specimens, and more and collectively attract more than 650,000 visitors annually. Other trademark features on campus include Harvard Yard, which contains administrative offices, academic buildings, and dormitories; scenic views along the Charles River; and Mt. Auburn Street, the center of Harvard nightlife.

Harvard University states that all J-1 scholars and their accompanying dependents are required as per U.S government regulations to obtain and maintain health insurance that meets those federal regulations. It’s also required that the plan meet additional requirements such as: Covers any pre-existing condition after a reasonable waiting period, and a maximum required co-payment of 25%. Harvard’s health insurance plans do meet the J visa standards except for medical evacuation and repatriation. The Atlas MedEvac would be a good supplement in order to fulfill the J visa requirements.

Harvard University advises that due to Massachusetts State law, all international students are automatically enrolled in the school’s health insurance plan. Students may waive for a plan that is comparable to the plan offered by the school and is an American-based carrier the meets the Commonwealth of Massachusetts standards. Dependents are also required to have health insurance; however, there is no mention of specific requirements. Dependents are able to be enrolled in the school’s plan at the registered student’s discretion. Dependents of international students can find the available plans under each given section. Plans listed in the exchange visitor section do meet all the federal limits of coverage as required by the U.S Department of State.

Please contact our office for further information. This information is subject to change.