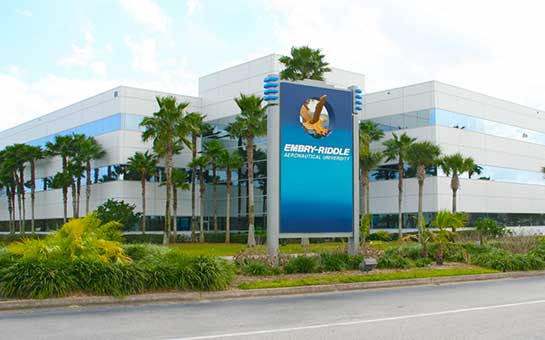 Embry–Riddle Aeronautical University has two main campuses located in Daytona Beach, Florida, and Prescott, Arizona. It’s the largest higher education institution in the U.S. that specializes in aviation and aerospace. The school’s colors are blue and gold, and its athletic nickname (appropriately) is the eagle.

In 1925, Talton Higbee Embry and John Paul Riddle founded the Embry–Riddle company in Ohio. The company opened the Embry–Riddle School of Aviation in 1926, but after a merge with the Aviation Corporation, the school closed in 1930. It re-opened in 1939 in Miami, Florida, and moved to Daytona Beach in 1965 in advance of the announced closure of the Miami airport where they conducted flight operations. The school was awarded university status in 1968 and opened its second residential campus in Prescott, Arizona, in 1978.

The Prescott, Arizona, campus offers a desert climate and almost 300 days of clear skies per year. The school features five wind tunnels, an aviation safety center with an accident investigation lab, and it offers the only Global Security and Intelligence Studies program in the country.

Many Embry–Riddle alumni move on to high-ranking positions in the military, the airline industry, and NASA. Notable figures include astronauts Daniel Burbank and Alvin Drew; Glen Doherty, a Navy SEAL killed in the 2012 Benghazi Attack; and Mark Tillman, commander of Air Force One from 2001–2009 under President George W. Bush.