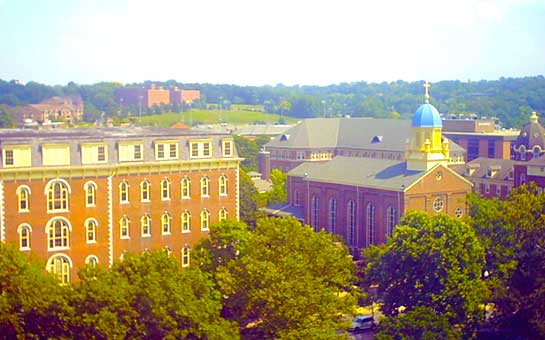 The University of Dayton is a private, Roman Catholic university in Dayton, Ohio. It was founded by the Society of Mary (the Marianists) and is one of three Marianist universities in the United States. It opened as St. Mary’s School for Boys in 1850 and became a college in 1882. It gained its current name in 1920. It opened a college for women in 1935, but that school closed in 1937 when women were granted admittance to the main university. Today, the University of Dayton enrolls more than 11,000 students and counting each year. The school’s colors are red and Columbia blue, and its athletic nickname is the flyers.

Notable research facilities on campus include the Anderson Information Sciences Center and the University of Dayton Research Institute, which focuses on developments and applications of materials engineering, structures, energy, propulsion, and more. Campus is also home to the Marian Library, which has the largest collection in the world of materials relating to Mary, the mother of Jesus.

One noteworthy UD tradition is Christmas on Campus, usually held on December 8 of each year. UD students put on a festival and host local schoolchildren for gift-giving, games, singing, dancing, face-painting, and meeting Santa Claus. The event is free, open to the public, and culminates with a Mass in the Immaculate Conception Chapel.

UD offers study abroad programs at the University of Augsburg in Germany, as well as Asia, Latin America, western Europe, and Australia. It also operates the University of Dayton China Institute in Suzhou Industrial Park in Shanghai, China.

University of Dayton has standard insurance requirements for international students. These include medical benefits of at least $250,000 per condition; a deductible of $500 or less per individual, medical evacuation of $50,000, repatriation of remains coverage of $25,000, and that lasts the full duration of the program. There is no university health plan. Students are expected to purchase their own plan that meets university standards.