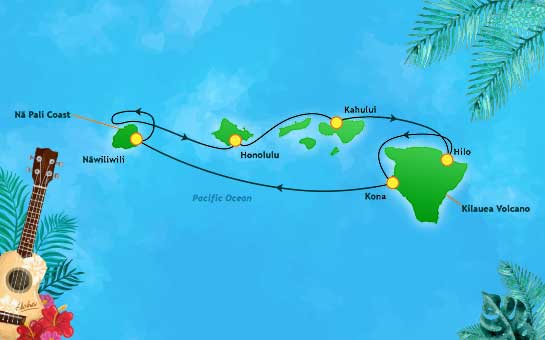 https://www.insubuy.com:443/visitors-insurance/
What is the difference?

Hawaii is a state of the United States and is made up of several islands that erupted a long time ago due to volcanic activity. There are four major islands: Oahu, Maui, Kauai, and the Big Island.

The flight time from California to Hawaii is around 5 hours and 20 minutes to 6 hours towards the west, and Hawaii marks about the halfway point between California and fast east Asia, such as China and Japan.

There are primarily two ways to travel within the Hawaiian Islands: First, you can take a flight from one island to another. Of course, you have to go through all the regular formalities of clearance at the airport, taking a flight, and so on. It is reasonable to assume that it will take you almost a day to get situated from a hotel in one island to another hotel in another island. Therefore, if you are visiting Hawaii for a week to ten days, you can visit at most only two of the islands, practically speaking. Even on the fastest trip possible, you would need to allocate at least two weeks to visit all four major islands.

Alternatively, traveling between islands on a cruise is an excellent way to visit various Hawaiian Islands. You can go sightseeing on one island during the day, and the cruise ship will take you to another island while you sleep. This convenience makes Hawaiian cruises a very attractive option for visitors.

A Hawaii cruise would typically start and end in Honolulu on the island of Oahu. Those are called inter-island cruises.

The exact itinerary and the ports may vary by the cruise line and their specific cruise, but they are generally as follows:

Even though Oahu is not the largest of the islands, it's home to Honolulu, the largest city in (and capital of) Hawaii. While in Honolulu, you would feel just like you are in a large city such as New York or Chicago, as it has tall buildings and is quite congested. Honolulu has the only king's palace in the United States, called Ioalani Palace. However, if you are traveling by car, parking there is a big challenge. If you are not used to driving in downtown traffic, it would be best not to drive in Honolulu.

For the adventurous sort, climbing Diamond Head is the historic landmark to visit. Waikiki Beach in Honolulu is quite famous. A visit to Waimea Falls is quite pleasant. For those interested in history, a visit to Pearl Harbor would be very interesting, as it is among Oahu's main attractions.

Maui is one of the smaller islands, but it is very beautiful. You can, of course, relax on a beach at any time, but you can also attend a luau, go whale-watching, swim with sea turtles, or tour a pineapple farm. Maui's largest natural attraction is Haleakala National Park.

Even though the island has two ports, Lahaina and Kahului, most cruise lines will use either one of them, but not both.

The Big Island, also called Hawaii island, is the largest of all Hawaii and is roughly shaped like a Hershey's Kiss chocolate. There is a population and road around the island, and the mountain in the middle.

A Hawaiian cruise would typically include two ports on this island: Hilo on the eastern side, and Kona on the western side.

Hilo gets a lot of rain and is completely green. In fact, it is a rainforest—after relaxing at the beach, you can explore the rainforest and its wonderful natural attractions. There are also rainbow falls. You can visit the site where lava flows from the mountain into the ocean. There is also a helicopter tour where they can take you to the top of an active volcano (of course, not when it is erupting heavily), and from the top, it looks just like a little barbeque on.

On the other hand, Kona is quite dry and has a lot of land that looks like you have landed on another planet. This is the remnant of a long-ago volcanic eruption. There are many beaches, parks, and water activities to do on this side. While in Kona, don't forget to taste the various coffees, as it has some of the world's best.

If you are on the cruise, you will visit two different ports. You will not be going from Kona to Hilo, but there is only one road that connects them, called Saddle Road, which goes over the mountain. That is the loneliest road that you may possibly travel in your lifetime, as there are no intersections or signals but just one road all the way. No houses, no shops, and there is literally nothing on the way.

Among the major four islands, Kauai is the northernmost island. Tropical rainforests cover most of the island. There are many attractions to visit, including the Waimea Canyon, which is called the “Grand Canyon of the Pacific”. You can also visit the double waterfall in lush surroundings called Wailua Falls. If your budget permits, you can visit the Na Pali Coast (which is best toured by a helicopter ride), and if you are lucky, you might spot a few whales. If you are an experienced hiker, you can trek from Ke'e Beach to Kalalau Valley, a distance of about 11 miles (about 17 kilometers), but that would be only one way to reach the coast line.

In addition to the inter-island cruises that start and end in Honolulu, there are also cruises that take you to French Polynesia, including the Bora Bora islands. However, such cruises last a minimum of 14 days and would typically drop you in French Polynesia, and you would have to travel back on a flight on your own. There are also some cruise ships that sail from California in the U.S. or Vancouver in Canada, but you would be spending a lot of time on the cruise ship itself, rather than doing excursions in Hawaii.

Hawaii is just like any other state of the United States. Even though it is a group of islands and far from the continental United States, it is not a territory. Therefore, the requirements to visit Hawaii are the same as those to visit New York or Las Vegas.

For U.S. citizens and permanent residents (greencard holders), it is purely domestic travel, just like going from Chicago to Dallas, for example. Therefore, they only need a driver's license. However, starting in late 2021, Real ID will be required.

For non-U.S. citizens, the requirements would be the same as visiting any other place in the U.S. If your country of citizenship participates in the Visa Waiver Program, you would need ESTA Authorization. Otherwise, you would need a U.S. visa.

There are some direct flights from a few locations, such as Dallas or Boston to Honolulu. However, as Hawaii is far from the continental United States, for most people, getting there would involve taking multiple flights with a stop in either Los Angeles or San Francisco. In case you miss your connection in California, or the flight is late reaching Hawaii, travel insurance can help you get compensated if you were to miss your cruise's departure.

Hawaiian cruise travel insurance would provide emergency medical coverage if you were to get sick or injured while on your cruise or on one of the islands. The cruise ship may have only basic medical facilities. Besides Honolulu, most other places are considered remote and may not have adequate medical facilities. Therefore, emergency medical evacuation in travel insurance is very important, as it can help transport you to the nearest place where adequate care can be given. Once you are fit enough to travel, the repatriation coverage would get you home.

While you are on a cruise, if a major event were to occur at home—such as your house flooding or catching on fire, or one of your close relatives passing away— trip interruption coverage in travel insurance would help you pay for the additional expenses in getting back home early, as well as refund you for the unused portion of your trip cost.

The most important benefit in purchasing travel insurance is its trip cancellation coverage. It provides coverage for prepaid, nonrefundable trip costs if you cannot take your trip for a covered reason.