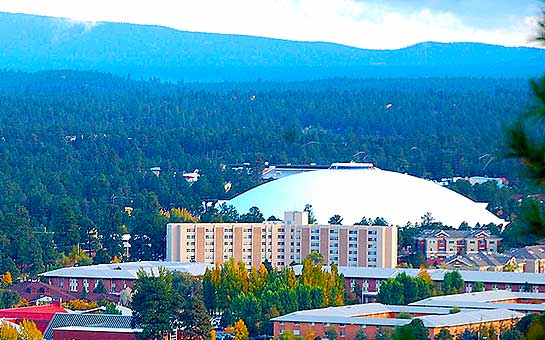 Northern Arizona University (NAU), located in Flagstaff, Arizona, was established in 1899. It opened as the Northern Arizona Normal School, a teacher training institution, and its first graduating class consisted of four women. The school gained the right to grant bachelor’s degrees (in education) in 1925. Enrollment increased during the Great Depression but plummeted during WWII. During the post-war boom, the school expanded its education offerings beyond education into the arts and sciences. The school became Arizona State College at Flagstaff in 1945 and, by 1966, it had gained university status and adopted its present name.

NAU enrolls about 22,000 students per year on its main campus. Its colors are blue and gold, and its athletic nickname is the lumberjacks. It also operates several branch campuses, the largest of which is in Yuma, Arizona, and serves an additional 8,000 students through its online education program.

The school is home to several research initiatives focused on Native American culture. The Center for American Indian Resilience studies the role of traditional knowledge and cultural strategies in teaching health behavior. The Institute for Tribal Environmental Professionals works with tribal governments to protect Native American environmental resources. The Partnership for Native American Cancer Prevention conducts cancer research with the goal of lessening the disparity caused by cancer in Native American tribes. NAU is also home to the Arizona Earthquake Information Center, which collects and distributes information about Arizona earthquakes, and it conducts research with the independent Lowell Observatory, located in Flagstaff.

Northern Arizona University J-1 Exchange Visitors (Short-term Scholars, Research Scholars, Professors, and Specialists) and their dependents are required to have health insurance as listed on the U.S. Department of State Exchange Visitor Program page. For those J-1 Exchange Visitors who are eligible to be offered the school’s plan, they would have to purchase a MedEvac plan separately, as the plan doesn’t include the coverage. F-1 and all other international student visa holders, including J-1 international student visas, are automatically enrolled in the school’s insurance plan. Please contact our office if you would like more information. Dependents are not required to be on the University plan. May be subject to change based on a health insurance wavier or compliance form.