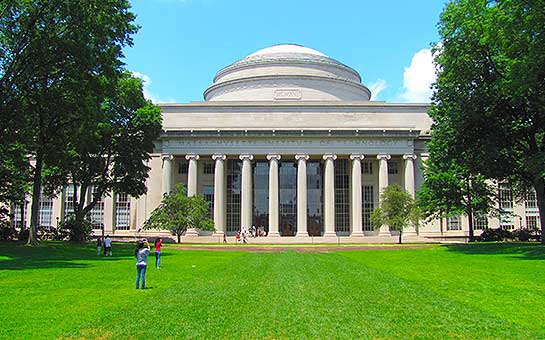 The Massachusetts Institute of Technology (MIT), located in Cambridge, Massachusetts, was established in 1861. It was chartered by the Commonwealth of Massachusetts two days before the first shots of the U.S. Civil War, and the school opened its doors to students in Boston in 1865. The school was informally known as “Boston Tech” until it relocated to its current location in 1916. It was founded to meet the educational and professional requirements of the increasing industrialization of the United States and focused primarily on applied science and engineering. During the first half of the 20th century, it evolved into an internationally recognized powerhouse of scientific and technical research. Today, MIT enrolls more than 11,000 students and counting each year. The school colors are cardinal red and silver gray, and its athletic nickname is the Engineers.

MIT offers undergraduate and graduate degrees across its six academic divisions: the School of Architecture and Planning; the School of Engineering; the School of Humanities, Arts, and Social Sciences; the Sloan School of Management; the School of Science; and the MIT Schwarzman College of Computing. The university is best known for its STEM-field education, but its programs in subjects like economics, political science, urban studies, linguistics, and philosophy are also highly regarded.

The school is known for its high level of research activity. University facilities include a nuclear reactor, a computation center, a geophysical observatory, an astrophysical observatory, a particle accelerator, several wind tunnels, and an artificial intelligence laboratory. More than 85% of undergraduates participate in some kind of faculty-led research project. Its research has received funding from organizations like the Department of Health and Human Services, the Department of Defense, the National Science Foundation, and NASA.

Points of interest on campus include the MIT Museum, founded in 1971 and exhibiting collections related to holography, technology, artificial intelligence, maritime history, and the history of the school; five subject libraries specializing in engineering, economics, humanities and science, music, and arts and architecture; and the List Visual Arts Center, which features rotating artwork exhibitions.

J-1 exchange visitors and their J-2 dependents must be covered by medical insurance that meets the U.S. Department of State regulations for the duration of the J-1 program. Minimum health insurance requirements include medical benefits of at least $100,000 per accident or illness; repatriation of remains of $25,000; medical evacuation of $50,000; a deductible not to exceed $500 per accident or illness; and a co-insurance not to exceed 25%.

F-Visa students are automatically enrolled in the school’s insurance plan. F-1 and J-1 international students may waive if the plan is comparable to the school’s insurance plan. It must meet the state of Massachusetts minimum standards, which include that the plan be ACA-compliant and for students to maintain ACA coverage or be subject to a penalty. J-2 students are required to purchase the school plan if the duration of their stay is longer than three months.