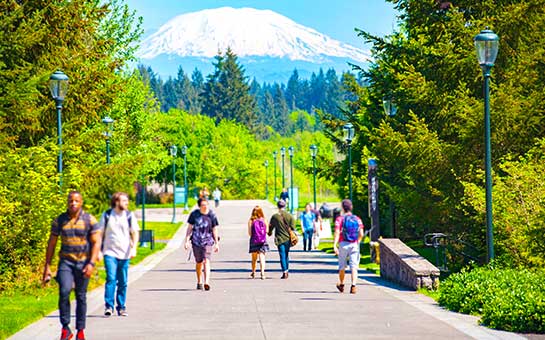 Washington State University Vancouver, located in Vancouver, Washington, was established in 1989 as one of four campuses of the Washington State University System. Not to be confused with the nearby Canadian city, Vancouver lies on the southern end of Washington State, about ten miles north of Portland, Oregon. The university moved to its current campus in 1996. Originally an undergraduate transfer institution, the school admitted its first freshman class and became a four-year university in 2006. Today, the school offers more than 20 bachelor’s degrees, almost 10 master’s degrees, and three doctorate degrees across its eight colleges. It enrolls more than 3,500 students and counting each year. The school colors are crimson and gray, and its athletic nickname is the cougars.

WSU Vancouver is the state’s only four-year research university. Many of the research labs at WSU Vancouver fall under the School of Engineering and Computer Science, including the Nanomaterials-Sensor Laboratory, the Wireless Circuit and System Research Lab, the Robotics and Automation Lab, and the Advanced Materials and Manufacturing Lab.

The university has a local focus; more than 90% of WSU Vancouver graduates remain in the region, employed at industrial and tech companies in Washington, Oregon, and California.

WSU Vancouver also offers the Child Development Program, a full-day private preschool for children ages 3–5. The program gives university students the opportunity to work with children and encourage the “best practices” model of child learning in an educational / research setting.

Noteworthy on-campus features include the Cougar Trails, six miles of walking, jogging, and biking paths that wind through and around campus and some forested regions beyond. It’s also home to a student union, student organizations like a history club and an LGBT club, a student-run radio station, and a visual arts and literary magazine called the Salmon Creek Journal.

All F-1 and J-1 international students at WSU will be automatically enrolled in health insurance through WSU’s health care provider. Some students may qualify for an exemption if they already have U.S.-based health insurance. The only two exemptions are for students enrolled in a medical insurance plan sponsored by a U.S. employer of themselves or a family member (parent, spouse, partner), or students enrolled at WSU but conducting research outside of the United States.

WSU enrolls J-1 scholars in its International Student Health Insurance Program, but they will need to purchase separate coverage for any J-2 dependents who accompany them. Minimum coverage requirements include medical benefits of at least $100,000 per accident or illness, repatriation of remains of $25,000, medical evacuation of $50,000, and a deductible not to exceed $500 per accident or illness. A waiting period for pre-existing conditions should be reasonable relative to current industry standards. Scholars may be required to pay up to 25 percent of the covered benefits per accident or illness. The policy shall not unreasonably exclude coverage for perils inherent to the activities of the exchange program.