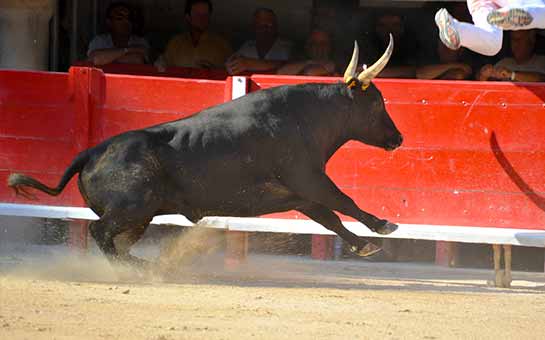 Running of the Bulls Travel Insurance

Running of bulls happens throughout Central & South America and Europe, with the most famous run occurring in the city of Pamplona, a region of Navarra in northern Spain. Thousands of people flock to Spain every year for the Running of the Bulls. The first documented run was hosted in Cuellar, Spain in 1215 and began to gain popularity in the early 14th century. The origin of the running of the bulls derives from the need to move the bulls from a corral outside of the city where they stayed, to the bullring in the city where they would be used later for the Bullfights. During the transfer, young men would try to race in front of the bulls.

The Running of the Bulls in Pamplona, also known as Encierro, is part of San Fermín, a festival to celebrate Saint Fermín, a patron of Navarra. The festival is an eight day celebration that occurs from July 6th-14th in celebration of patron Saint Fermin. Each morning begins with a benediction to the saint, followed by the first Bull Run, which begins on July 7th at 8 am.

The bulls begin on Santo Domingo Street running in a linear path through four streets and end in the bullring, Plaza de Toros de Pamplona. Guiding the path are two rows of wooden fencing that is wide enough for participants to pass through if they wish to stop running. Medical personnel and security are behind the fence as well as areas for spectators to view the running.

Most runners wear white clothing with a red scarf tied around their waist or a red bandana on their neck. This event requires great physical ability, as the bulls are estimated to run at a speed of 24 km or 15 mph. To participate in the run you must meet certain requirements, runners must be 18 or older, not intoxicated, run in the same direction as the bulls, and not incite them.

Rockets are used to communicate with the runners and the crowds. the first rocket launched indicates that the corral gate has been opened. Shortly followed by the second rocket announcing that the bulls have been released. Near the end of the run, the third rocket launches signifying that all the bulls have entered the bull ring, and the final rocket tells everyone that all the bulls have entered the corral of the bull ring. Many runners hop through the first line of fencing once the bulls get close. Others keep up with the bulls, but people and animals tend to pile up going into bull ring as thousands of people and a herd of 15 try to squeeze through at the same time.

Typically by the week's end there is an average of 200-300 injuries every year ranging from bruising to death. Over 200 people collaborate to provide medical care over the 826 meter track, hoping to stabilize the injured as quickly as possible. Since records started being kept in 1910, 15 people have met their demise running with the Bulls. Of the 15 that lost their life, 13 died as a result of being gored by a bull.

To add insult to injury, if something like this were to happen to you the odds are, your insurance would not cover the medical expense. Running with bulls is considered a hazardous activity and as such it will be excluded from most insurance policies. This means that you would be responsible for the entire bill without the right insurance. Fortunately, at Insubuy, we know which plans will cover the participation of or the spectating of the running of the bulls, so if this activity is for you, contact our office to be sure you're choosing the right plan.

One such plan comes from Diplomat International. If you purchase the Athletic Sports & Hazardous Activity Rider and make sure to select the "High Option" of "Table 1", you'll find "Running with the Bulls" as a Covered Injury or Illness for Medical Expense Benefits. Again, if you have any questions or need any assistance, please call us at 1 (866) INSUBUY or send an email to ofni. Our licensed, experienced representatives will be happy to help select the plan that fits your individual needs.